Exclusive Representation of the Nativity Scene.

The charm of the Infant God will make you forget your worries, your sorrows.
Jesus offers you the gift of a child’s heart filled with love, peace and true happiness.

Services are free of charge. 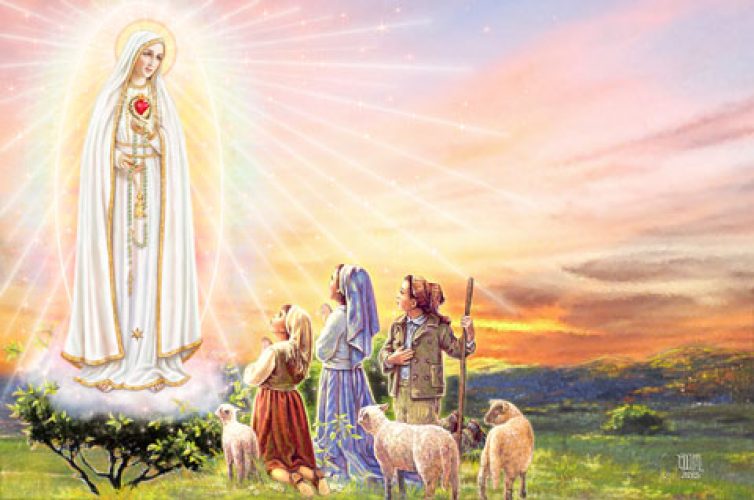 On May 13, 1917, the Blessed Virgin came once again to visit Her children on earth. As is well known, She cast Her eyes upon three humble little shepherds from Portugal: Lucia, Francisco and Jacinta. Our Lady said to Lucia, the eldest of the seers:

“Jesus wants to use you to make Me known and loved. He wants to establish in the world devotion to My Immaculate Heart… Do not be discouraged! I will never abandon you. My Immaculate Heart will be your refuge and the way that will lead you to God.” (Apparition of June 13, 1917)

What did Mary ask?

At Fatima, as in the other great apparitions, the essence of Our Lady’s message was an insistent call to PRAYER and PENITENCE.

“I am from Heaven…”, Mary said to the three little shepherds.

“Sacrifice yourself for sinners and say often, but especially when making some sacrifice: ‘O Jesus, it is for Your love, for the conversion of sinners and in reparation for the offenses done to the Immaculate Heart of Mary.’” (July 13, 1917)

“Pray, pray a great deal and make sacrifices for sinners, for MANY SOULS ARE GOING TO HELL BECAUSE THERE IS NO ONE WHO IS SACRIFYING AND PRAYING FOR THEM.” (August 19, 1917)

Almost at each of Her visits, Our Lady insists on the daily recitation of the Rosary.

The great miracle of the dance of the sun, in the presence of a crowd of several thousand people, was the great sign foretold by the Blessed Virgin to prove Her coming to these places. Thus, with the Secret revealed to Lucia, Mary concluded Her famous apparitions at Fatima in 1917.

A word about the Secret of Fatima

Each of Our Lady’s confidants received a secret. Lucia’s secret, divided into three parts, is the most important. The first part concerns the vision of Hell; the second, the announcement of the World War. Twenty-five years after the apparitions, the text of the two parts of the secret was revealed.

As for the third part, the Church was required to reveal it after Lucia’s death or, at the latest, in 1960. But nothing was done about it, the message being undoubtedly too compromising!…

On October 15, 1963, the “Neues Europa” published an article by Louis Emrich entitled “The Future of Humanity”, in which he made public a “document” which would be an extract from the Secret of Fatima. This article was allegedly sent by the Vatican diplomatic authorities to the Heads of State of America and Russia, among others. Translated and distributed, these extracts from the third part of the Secret were likely to arouse an awakening in Christianity, but when the majority of the Pastors themselves have only indifference or even hostility towards the “secret”, who will be surprised by the indifference of the faithful? Will the men of the Church still have the power to ignore the will of Heaven and to silence the One whom all centuries proclaim to be “Mother of the Church”? If the Mother no longer has the right to speak, what use are all the reverences that Her children could offer Her?

Considered “a prophet of doom” by Her children on earth, our sweet Mother suffers in Her solitude, consoled only by a very small number of children who struggle to remain faithful to Her until the happy hour of the triumph of Her Sorrowful and Immaculate Heart.

May this triumph of our heavenly Mother, the Queen of the Rosary, come soon; may it come for the greater glory of God and the salvation of souls, for the renewal of the Holy Church of Jesus Christ and the coming of peace in the world.

Let us respond generously to the request of the Blessed Virgin by increasing our fervor in prayer and sacrifice.