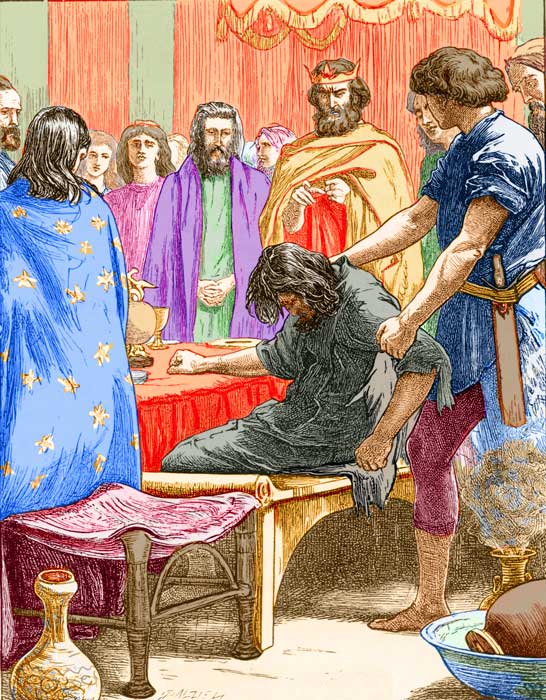 I am the salvation of the people, said the Lord: in what distress soever they call upon Me, I will hear them: and will be their Lord for ever. Psalm. Attend, O My people, unto My law: incline your ear to the words of My mouth.

O almighty and merciful God, graciously keep away from us all things that are adverse: that being free in mind and body, we may, with unimpeded minds, attend to the things that are Thine.

Lesson of the Epistle of St.Paul the Apostle to the Ephesians, Chapter IV.

Brethren: be renewed in the spirit of your mind; and put on the new man, who, according to God, is created in justice, and holiness of truth. Wherefore, putting away lying, speak ye the truth every man with his neighbour: for we are members one of another. Be angry and sin not. Let not the sun go down upon your anger. Give not place to the devil. He that stole, let him now steal no more; but rather let him labour, working with his hands the thing which is good, that he may have something to give to him that suffereth need.

In Jesus, as the complement of His Incarnation, Wisdom aspires at uniting with herself all the members, also, of that human race, of which He is the Head, and the First-born; by Him the Holy Ghost, whose sacred fount He is, pours Himself out upon man, whereby to adapt him to his sublime vocation, and to consummate, in infinite love (which is Himself), that union of every creature with the divine Word. Thus it is that we verily partake of that life of God, whose existence and holiness are the knowledge and love of His own Word; thus it is that we are sanctified in truth by the participation of that very holiness wherewith God is holy by nature.

The Son of Man, being God, participates for us His brethren, in the life of union in the truth which constitutes the holiness of the blessed Trinity.

But He communicates that life, that truth, that deifying union, to none save those who have truly become His members, and who, in Him, reproduce between one another, by the operation of the Spirit of truth and love, that unity of which that sanctifying Spirit is the almighty bond in the Godhead. ‘May they all be one, as Thou, Father, in Me, and I in Thee, said Jesus to His eternal Father, that they also may be one in Us. I have given unto them the glory (that is to say, the holiness) which Thou hast given unto Me, that they may be one, as We also are one; I in them, and Thou in Me, that they may be consummated (that is, be made perfect) in unity. Here we have, and formulated by our Lord Himself, the simple but fruitful axiom, the foundation of Christian dogma and morals. By that sublime prayer, He explained what He had previously been saying: I sanctify Myself for them, that they, also, may be sanctified in truth.

Let my prayer be directed as incense, in Thy sight, O Lord. May the lifting up of my hands be as an evening sacrifice. Alleluia, alleluia. Give glory to the Lord, and call upon His name: proclaim among the gentiles His works. Alleluia.

Sequel of the holy Gospel according to Matthew, Chapter XXII.

At that time: Jesus spoke to the chief priests and the pharisees in parables, saying: The kingdom of heaven is likened to a king, who made a marriage for his son. And he sent his servants, to call them that were invited to the marriage: and they would not come. Again he sent other servants, saying: Tell them that were invited: Behold, I have prepared my dinner: my beeves and fatlings are killed, and all things are ready: come ye to the marriage. But they neglected, and went their ways, one to his farm, and another to his merchandise. And the rest laid hands on his servants, and having treated them contumeliously, put them to death. But when the king had heard of it, he was angry, and sending his armies, he destroyed those murderers, and burnt their city. Then he saith to his servants: The marriage indeed is ready: but they that were invited were not worthy. Go ye therefore into the highways; and as many as ye shall find, call to the marriage. And his servants going forth into the ways, gathered together all that they found, both bad and good: and the wedding hall was filled with guests. And the king went in to see the guests: and he saw there a man who had not on a wedding garment. And he saith to him: Friend, how earnest thou in hither not having on a wedding garment? But he was silent. Then the king said to the waiters: Bind his hands and his feet, and cast him into the exterior darkness; there shall be weeping and gnashing of teeth. For many are called, but few are chosen.

Our heavenly King has confided, to the ministers of His love, the work of calling from every people the new guests. But now that His ambassadors, according to His command, have traversed the whole earth, bringing together all nations for this day of the joy of His heart, He Himself is coming in person, to see that nothing is wanting to the due preparation for the feast, and to give the signal for the eternal banquet of the divine nuptials. Now, for such a feast, and in such a place, if there be any deficiency, it can only be on the part of the guests. Let them, then, be careful not to draw down upon themselves, in this general and last examination, the displeasure of the great King, who has called them to an alliance with Himself. Though He has condescended to call them, notwithstanding their extreme poverty, from the public streets and highways, He has given them abundant time to lay aside their tatters; and knowing that they could not get ready of themselves, He has placed at their disposal, for the marriage-feast, the richest garments of His grace and virtues. Woe, then, to him who on the last day shall be found not having the wedding garment of charity! Such a want would admit of no excuse; and the King would justly punish it, by excluding the guilty man from the feast, as one that had insulted His Son.

The kingdom of heaven is the assembly of the just; for, the Lord says by a prophet: “Heaven is My throne” and Solomon says: “The soul of the just man is the throne of wisdom”; and Paul calls Christ “the Wisdom of God”. If, therefore, heaven be the throne of God, we must evidently conclude that, as Wisdom is God, and the soul of the just man is the throne of Wisdom, this soul is a heaven… The kingdom of heaven, then, is the assembly of the just… If this kingdom is said to be like to a King, who made a marriage for his Son, your charity at once understands who is this King, who is the Father of a Son, King like Himself. It is He, of Whom the Psalmist says: “Give to the King Thy judgment, O God, and to the King’s Son Thy justice!” God the Father made the marriage of God His Son, when He wished that He, who had been God before all ages, should become Man towards the end of ages. But we must not, on that account, suppose that there are two persons in Jesus Christ, our God and our Saviour… It is, perhaps, clearer and safer to say, that the King made a marriage for His Son, in that, by the mystery of the Incarnation, He united the Church to Him. The womb of the Virgin-Mother was the nuptial-chamber of that Bridegroom, of whom the Psalmist says: “He hath set His tabernacle in the sun: and He, as a Bridegroom, cometh out of His bride-chamber!”