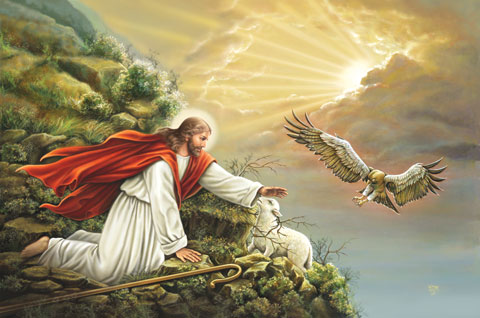 The miseries of this present life are the test to which God puts His soldiers; He passes judgment upon them, and classifies them, according to the degree of courage they have shown. Therefore is it, that we all have our share of suffering. The combat has commenced. God is looking on, watching how each of us comports himself. The day is not far off, when the Judge will pass sentence on the merits of each combatant, and award to each one the recompense he has won. Combat now; peace and rest and a crown, then. Happy they who, during these days of probation, have recognized the mighty hand of God in all the trials they have had, and have humbled themselves under its pressure, lovingly and confidingly! Against such Christians, who have been strong in faith, the roaring lion has not been able to prevail. They were sober, they were watchful, during this their pilgrimage. They therefore never sighed and moaned, as though they were the only sufferers; they did not assume the attitude of victims, and call it Resignation! but they took each trial as it came, and, without talking to every one about it, they quietly and joyously united it with the sufferings of Christ. O true Christians! you will be joyous for all eternity, when there will be made the manifestation of that eternal glory in Christ Jesus, which He will pass on to them, that they may share it with Him for ever!

This parable of the Sheep that is carried back to the fold on the Shepherd’s shoulders was a favorite one with the early Christians; and they made representations of it at almost every turn. The same is put before us in today’s Gospel, that our confidence may be strengthened in God’s infinite mercy. It reminds us, in its own beautiful way, of our Lord Jesus; whom we contemplated, a few weeks back, ascending triumphantly into heaven, carrying thither, in His arms, the lost human family, which He had won back from Satan and death and sin. For, as St. Ambrose says, “who is the Shepherd of our parable? It is Christ, who carries thee, poor man, in His own Body, and has taken all thy sins upon Himself. The Sheep is one, not by number, but by its kind. Rich Shepherd this, of whose flock all we human beings form but the hundredth part! for He has the Angels, and Archangels, and Dominations, and Powers, and Thrones, and all the rest, – all those other countless flocks, whom He has left yonder up the mountain, that He might run after the one Sheep He had lost.”

Look Thou, upon me, and have mercy on me, O Lord, for I am alone and poor; see my abjection and my labour; and forgive me all my sins. Psalm. To Thee, O Lord, have I lifted up my soul: in Thee, O my God, I place my trust, let me not be ashamed.

O God, the Protector of those who hope in Thee! without whose aid, nothing is strong, nothing holy: increase Thy mercy towards us; that under Thy direction and conduct, we may so pass through the blessings of this life, as not to lose those which are eternal.

Lesson of the Epistle of Saint Peter the Apostle I. Ch, V.

Dearly beloved: be ye humbled under the mighty hand of God, that He may exalt you in the time of visitation. Casting all your care upon Him, for He hath care of you. Be sober and watch: because your adversary the devil, as a roaring lion, goes about, seeking whom he may devour: whom resist ye, strong in faith; knowing that the same affliction befalls your brethren who are in the world. But the God of all grace, who has called us into His eternal glory in Christ Jesus, after ye have suffered a little, will Himself perfect you, and confirm and establish you. To Him be glory and empire for ever and ever. Amen.

Cast thy care upon the Lord: and He shall sustain thee. When I cried out to the Lord, He graciously heard my voice against those who were coming upon me. Allelluia, alleluia, God is a just judge, strong and patient; is He angry every day? Alleluia.

Sequel of the holy Gospel according to Saint Luke Ch. XV.

At that time: the publicans and sinners drew near unto Him to hear Him. And the Pharisees and Scribes murmured, saying: This man receives sinners and eats with them. And He spoke to them this parable, saying: What man of you that has a hundred sheep, and if he shall lose one of them, does he not leave the ninety-nine in the desert, and go after that which was lost until he find it? And when he has found it, lay it upon his shoulders rejoicing: and coming home call together his friends and neighbors, saying to them: Rejoice with me, because I have found my sheep that was lost? I say to you, that even so there shall be joy in heaven upon one sinner that does penance, more than upon ninety-nine just who need not penance. Or what woman having ten groats: if she lose one groat, does not light a candle, and sweep the house, and seek diligently until she find it? And when she has found it, call together her friends and neighbors, saying: Rejoice with me, because I have found the groat which I had lost? So I say to you there shall be joy before the angels of God upon one sinner doing penance.