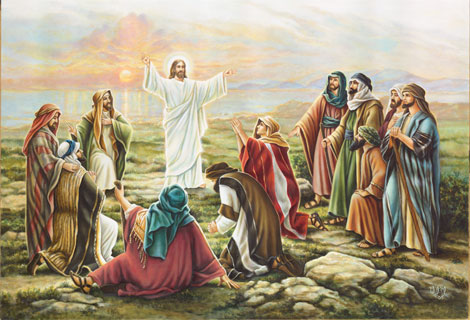 Fourth Sunday after Easter:
Consolation in the imminent coming of the Holy Spirit

During His sojourn on earth, our Redeemer thus explained the mystery of Baptism to Nicodemus, who was a ruler among the Jews, and a master in Israel: “Unless a man be born again of Water and the Holy Ghost, he cannot enter into the Kingdom of God.” Here, as in so many other instances, He foretells what He intends to do at a future time: He prepares us for the mystery, by telling us, that, as our first birth was not pure, He is preparing a second for us; that this second birth will be holy, and that Water is to be the instrument of so great a grace.

But, after His Resurrection, our Emmanuel openly announced His having given to Water the power of producing the sublime adoption to which mankind was invited by the Eternal Father. Speaking to His Apostles, He thus gives them the fundamental law of the Kingdom He had come from heaven to establish: “Go, teach ye all nations baptizing them in the name of the Father, and of the Son, and of the Holy Ghost.” This is the master-gift bestowed on the world by its Redeemer: –salvation by Water and the invocation of the Blessed Trinity; for He adds: “He that believeth and is baptized, shall be saved.” What a revelation was here! It told us of the infinite mercy, wherewith our Creator loved us: it was the inauguration of the Sacraments by the announcement of the first of the Seven, (Baptism)– of that one, which, according to the expression of the Holy Fathers, is the Gate to the rest.

Let us love this august mystery of Baptism, to which we are indebted for the life of our souls, and for the indelible character which makes us members of our divine Head, Jesus. The holy King of France, Saint Louis, who was baptized in the humble village of Poissy, loved to sign “Louis of Poissy.” He looked upon the baptismal font as the mother who had given him a life incomparably superior to that which made him the son of an earthly monarch: she gave him to be the child of God, and heir to the kingdom of Heaven. We should imitate this saintly King.

Laden with the blessings of God, who, by His divine Sacraments, has made them to be one people, the Faithful should not be satisfied with observing the commandments, they should love them; they should also long after the Heaven that is promised them. The Church prays, in the Collect, that her children may receive the grace to do all this:

Let us pray: O God, who makest the faithful to be of one mind: grant that Thy people may love what Thou commandest, and desire what Thou promisest: that, amid the uncertainties of this world, we may place our affections where there are true joys. Amen.

Lesson of the Epistle of Saint James the Apostle, Ch. I.

Beloved: Be doers of the Word, and not hearers only, deceiving yourselves. For if anyone is a hearer of the Word, and not a doer, he is like a man looking at his natural face in a mirror: for he looks at himself and goes away, and presently he forgets what kind of man he is. But he who has looked carefully into the perfect law of liberty and has remained in it, not becoming a forgetful hearer but a doer of the Word, shall be blessed in his deed. And if anyone thinks himself to be religious, not restraining his tongue but deceiving his own heart, that man’s religion is vain. Religion pure and undefiled before God the Father is this: to give aid to orphans and widows in their tribulation, and to keep oneself unspotted from this world.
Thanks be to God.

The favours bestowed upon the Christian people proceed from the goodness of our Heavenly Father. He is the source of everything in the order of nature; and if, in the order of grace, we are become His Children, it is because He sent us His Consubstantial Word, –the Word of Truth,– whereby, by means of Baptism, we were made Children of God. Hence, we ought to imitate, as far as our weakness will permit, the divine calm of our Father who is in heaven; we ought to avoid that state of passionate excitement, which savours of a terrestrial life, whereas ours should be of the heaven where God calls us. The Apostle bids us receive, with meekness, the Word, which makes us what we are. He tells us, that this Word is a seed of salvation grafted into our souls: only let us put no obstacle to its growth, and we shall be saved.

Sequel of the holy Gospel according to John, Ch. XVI.

At that time: Jesus said to His disciples: “Amen, amen, I say to you, if you ask the Father anything in My name, He will give it to you. Hitherto you have not asked anything in My name. Ask, and you shall receive, that your joy may be full. These things I have spoken to you in parables. The hour is coming when I will no longer speak to you in parables, but will speak to you plainly of the Father. In that day you shall ask in My name; and I do not say to you that I will ask the Father for you, for the Father Himself loves you because you have loved Me, and have believed that I came forth from God. I came forth from the Father and have come into the world. Again I leave the world and go to the Father.” His disciples said to Him, “Behold, now You speak plainly, and utter no parable. Now we know that You know all things, and do not need that anyone should question You. For this reason we believe that You came forth from God.”

Praise be to Thee, O Christ.

The Apostles were sad at hearing Jesus say to them: “I go.” Are we not sad, too? We, who, thanks to the sacred Liturgy, have been in such close company with Him, ever since the day of His Birth at Bethlehem. Yet a few days, and He is to ascend into Heaven, and our year is to lose the charm it possessed of following, day by day, the actions and words of our Emmanuel. Still, He would have us moderate our sadness. He tells us, that, in His stead, the Paraclete, the Comforter, is about to descend upon the earth, and abide with us to the end of time, in order that He may give us light and strength. Let us make good use of these last hours with our Jesus: we shall soon have to be preparing for the Divine Guest, who is to take His place.

By these words, which were spoken shortly before His passion, our Saviour does more than tell us of the coming of the Holy Ghost; He also shows us, how terrible this coming will be to them that have rejected the Messiah. His words are unusually mysterious: let us listen to the explanation given of them by Saint Augustine, the Doctor of Doctors. “When the Holy Ghost is come, says our Lord, He will convince the world of sin, because they believed not in Me.” How great must, indeed, be the responsibility of them, that have been witnesses of Jesus’ wonderful works, and yet will not receive His teaching! Jerusalem will be told that the Holy Ghost has come down upon the Disciples; and she will receive the news with the same indifference as she did the miracles which proved Jesus to be her Messiah. The coming of the Holy Ghost will serve as a sort of signal of the destruction of the Deicide City. Jesus adds: “The Paraclete will convince the world of Justice, because I go to the Father, and ye shall see Me no longer.” The Apostles, and they that believe their word, shall be just and holy by faith: they will believe in Him that is gone to the Father, –in Him whom they are to see no longer in this world. Jerusalem, on the contrary, will remember Him only to blaspheme Him: the holiness, the faith, the justice of them that shall believe, will be her condemnation, and the Holy Ghost will leave her to her fate. Jesus continues: “The Paraclete will convince the world of Judgment, because the prince of this world is already judged.” They that follow not Christ Jesus, follow Satan: he is their prince, but his judgment is already pronounced. The Holy Ghost warns the followers of the world, that their leader is already in eternal torments. Let them reflect well upon this; for, as Saint Augustine observes, “the pride of man has no right to reckon upon indulgence; let it but think of the hell into which even the angels were cast because they were proud.”