Pentecost Sunday: Descent of the Holy Spirit on the Blessed Virgin and the Apostles 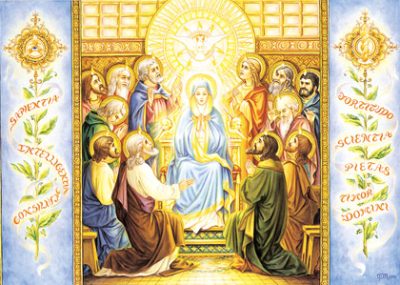 Jesus said to His disciples: If anyone loves Me, he will keep My word; and My Father will love him, and We will come to him, and make Our abode in him.

Nine days have passed since Jesus ascended to Heaven and the Apostles are gathered in the Upper Room with Mary, Mother of Jesus. They spend the days in ardent prayer.

At this moment when recollection is hovering over the entire Cenacle, Jerusalem is filled with pilgrims, who have flocked from every country of the Gentile world. They feel a strange mysterious expectation working in their souls. They are Jews, and have come from every foreign land where Israel has founded a synagogue; they have come to keep the feasts of Pasch and Pentecost. Asia, Africa, and even Rome, have here their representatives. Amidst these Jews properly so called, are to be seen many Gentiles, who, from a desire to serve God more faithfully, have embraced the Mosaic law and Observances; they are called proselytes. This influx of strangers, who have come to Jerusalem out of a desire to observe the Law, gives the city a Babel-like appearance, for each nation has its own language. They are not, however, under the influence of pride and prejudice, as are the inhabitants of Judea; neither have they, like these latter, known and rejected the Messias, nor blasphemed His works whereby He gave testimony of His divine character.

Let us enter the Upper Room to contemplate the marvels of the divine Spirit. First of all, we look for Mary; for Her who now, more than ever, is full of grace. After those measureless gifts lavished upon Her in Her Immaculate Conception; after the treasures of holiness infused into Her by the Incarnate Word during the nine months She bore Him in Her womb; after the special graces granted Her for acting and suffering in union with Her Son, in the work of the world’s Redemption; after the favours wherewith this same Jesus loaded Her when in the glory of His Resurrection: we should have thought that heaven had given all it could to a mere creature, however sublime the destiny of that creature might be. But no. Here is a new mission opened for Mary. The Church is born; she is born of Mary. Mary has given birth to the bride of Her Son; new duties fall upon the Mother of the Church. Jesus has ascended into heaven, leaving Mary upon the earth, that She may nurse the infant Church. Oh! How lovely and yet how dignified, is this infancy of our dear Church, cherished as she is, fed, and strengthened by Mary! But this second Eve, this true Mother of the living, must receive a fresh infusion of grace to fit Her for this Her new office: therefore it is that She has the first claim to, and the richest portion of, the gifts of the Holy Ghost. Heretofore, He overshadowed Her and made Her Mother of the Son of God; now He makes Her the Mother of the Christian people.

Let us contemplate this master-piece of Pentecost, and admire the new loveliness that beams in Mary from this new maternity. She is inflamed by the fire of divine love, and this in a way not felt before. She is all devoted to the office put upon Her, and for which She has been left on earth. The grace of the apostolate is granted to Her. She has received the tongue of fire; and although Her voice is not to make itself heard in public preaching, yet will She speak to the Apostles, directing and consoling them in their labours. She will speak, too, to the faithful, but with a force, a sweetness, and a persuasiveness, becoming one whom God has made the most exalted of His creatures. The primitive Christians, with such a training as this, will have vigour and energy enough to resist all the attacks of hell, and, like Stephen who had often listened to Her inspiring words, to die martyrs for the faith.

Lesson from the Acts of the Apostles, ch. II

When the days of Pentecost were accomplished, they were all together in one place; and suddenly there came a sound from heaven, as of a mighty wind coming, and it filled the whole house where they were sitting. And there appeared to them parted tongues as it were of fire, and it sat upon every one of them: and they were all filled with the Holy Ghost, and they began to speak with divers tongues, according as the Holy Ghost gave them to speak. Now there were dwelling at Jerusalem Jews, devout men out of every nation under heaven. And when this was noised abroad, the multitude came together, and were confounded in mind, be cause that every man heard them speak in his own tongue.

And they were all amazed and wondered, saying: Behold, are not all these, that speak, Galileans? and how have we heard, every man our own tongue wherein we were born? Parthians, and Modes, and Elamites, and inhabitants of Mesopotamia, Judea, and Cappadocia, Pohtus and Asia, Phrygia and Painphilia, Egypt and the parts of Lybia about Cyrene, and strangers of Rome, Jews also, and Proselytes, Cretes and Arabians: we have heard them speak in our own tongues the wonderful works of God.

Four greats events mark the sojourn of man on earth; and each of them is a proof of God’s infinite goodness towards us. The first is the creation of man and his vocation to a supernatural state, which gives him, as his last end, the eternal vision and possession of God. The second is the Incarnation of the divine Word, who, by uniting the human to the divine Nature, raises a created being to a participation of the Divinity, and, at the same time, provides the Victim needed for redeeming Adam and his race from the state of perdition into which they fell by sin. The third event is that which we celebrate today, the descent of the Holy Ghost. The fourth is the second coming of the Son of God, when He will free His bride, the Church, from the shackles of mortality, and lead her to heaven, there to celebrate His eternal nuptials with her. In these four divine acts, the last of which has not yet been accomplished, is included the whole history of mankind; all other events bear, more or less, upon them. Of course, “the sensual man perceives not these things;” he never gives them a thought. “The light shineth in darkness, and darkness did not not comprehend it.” Blessed, then, be the God of mercy, who hath called us out of darkness, into His marvellous light, the light of faith! He has made us children of that “generation, which is not of flesh, nor of blood, nor of the will of man, but of God.” It is by this grace that we are now all attention to the third of God’s great works, the descent of the Holy Ghost. We have been listening to the thrilling account given us of His coming. That mysterious storm, that fire, those tongues, that sacred enthusiasm of the disciples, have told us so much of God’s plans upon this our world! We could not but say within ourselves: “Has God loved the world so much as this?” When our Redeemer was living with us on the earth, He said to one of His disciples: “God hath so loved the world as to give it His only-begotten Son.” The mystery achieved today forces us to complete these words, and say: “The Father and the Son have so loved the world, as to give it Their own divine Spirit!” Let us gratefully accept the Gift, and learn what man is. Rationalisrn and naturalism will have it that man’s true happiness consists in following their principles, which are principles of pride and sensuality. Faith, on the contrary, teaches us humility and mortification, and at the same time it shows us God giving Himself to us.

May the pouring forth of the Holy Spirit into our hearts cleanse them, O Lord, and render them fruitful by the sprinkling of the dew of His grace.

The sequel of the holy Gospel according to Saint John. Chap. XIV

At that time Jesus said to His disciples: If anyone loves Me, he will keep My word; and My Father will love him, and We will come to him, and make Our abode in him. He who does not love Me does not keep My words; and the word which you have heard is not My word, but that of My Father who sent Me. I have said this to you, still dwelling with you; but the Paraclete, the Holy Spirit, whom the Father will send in My name, will teach you all things, and bring to your remembrance all that I have said to you. I leave you peace, I give you My peace. I give it to you, not as the world gives it. Let not your heart be troubled nor afraid. You have heard that I have said to you, I am going away and I am coming back to you. If you love Me, you will rejoice that I am going to the Father, because the Father is greater than I am. I tell you this now, before it happens, so that when it happens you will believe. I will not speak to you much more; for the Prince of this world is coming, and he has nothing in Me that is his; but that the world may know that I love the Father, and that, according to the commandment which the Father has given Me, so I do.

Back to the Liturgy Homepage

To ask for the love of the Heart of Jesus.

There is no greater treasure in Heaven and on earth than the Love of the Heart of Jesus.

Litany of the Sacred Heart of Jesus

O Jesus, meek and humble of Heart, change my heart with Yours!

From His tabernacle, Jesus calls us.

Let us respond with all the love of our hearts.

To ask for the blessing of the Blessed Sacrament.

For my family and all those I love.