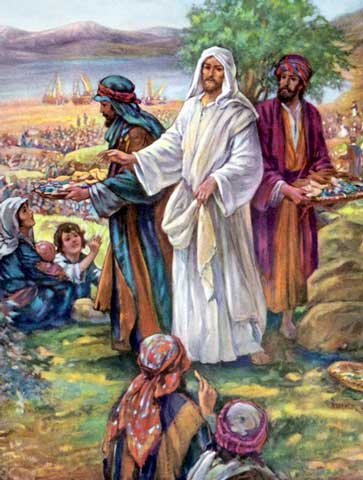 Sixth Sunday after Pentecost – The multiplication of loaves

Sin is always a folly and a weakness, no matter of what kind it may be, or who he be that commits it. The rebel angel, and fallen man, may, in their pride, make efforts to persuade themselves that, when they sinned, they did not act as fools, and were not weak; but all their efforts are vain; sin must ever have this disgrace upon it, that it is folly and weakness, for it is a revolt against God, a contempt for His law, a mad act of the creature, who, being made by his Creator to attain infinite happiness and glory, prefers to debase himself by turning towards nothingness, and then falls even lower than the nothingness from which he was taken. It is, however, a folly that is voluntary, and a weakness that has no excuse; for, although the creature have nothing of his own but darkness and misery, yet his infinitely merciful Creator, by means of His grace, which is never wanting, puts within that creature’s reach divine strength and light.

It is so with even the sinner that has been the least liberally gifted; he has no reason that can justify his offences. But when he that sins is a creature who has been laden with God’s gifts, and, by His divine generosity, been raised higher than others in the order of grace, oh! then the offence he commits against his Benefactor is an injury that has no name. Let this be remembered by those who, like David, could say that their God has multiplied His magnificence over them. They may, perhaps, have been led by Him into high paths which are reserved for the favoured few, and may have reached the heights of divine union: yet must they be on their guard; no one who has still to carry with him the burden of a mortal body of flesh is safe, unless by exercising a ceaseless vigilance. On the mountains, as on the plains and in the valleys, at all times and in all places, a fall is possible; but when it is on those lofty peaks which, in this land of exile, seem bordering on heaven, and but one step from the entrance into the powers of the Lord, what a terrific fall when the foot slips there! The yawning precipices which that soul had avoided on her ascent are now all open to engulf her; abyss after abyss of crime she rushes into, and with a violence of passion that terrifies even them that have long been nothing but wickedness.

Poor fallen soul! pride, like that of satan, will now try to keep her obstinately fixed in her crimes: but, from the depths into which she has fallen, let her, like David, send forth the cry of humility; let her lament her abominations; let her not be afraid to look up, through her tears, at those glorious heights which were once her abode – an anticipated heaven. Without further delay, let her imitate the royal penitent, and say with him: I have sinned against the Lord! and she will hear the same answer that he did: The Lord has taken away your sin; you shall not die; and as with David, so also with her, God may still do grand things in her. David, when innocent, was a faithful image of Christ, who was the object of the love of both heaven and earth; David, sinner but penitent, was still the figure of the Man-God, as laden with the sins of the whole world, and bearing on His single self the merciful and just vengeance of His offended Father.

Introit. The Lord is the strength of His people, and the protector of the salvation of His Christ: save, O Lord, Thy people, and bless Thine inheritance, and govern them for ever. Psalm. To Thee, O Lord, will I cry out: O my God, be not silent, refuse not to answer me, lest I become like those who descend into the pit.

Collect. O God of all power, to whom belongs whatsoever is best: implant in our hearts the love of Thy name, and grant us an increase of religion: that Thou mayst nourish what is good in us, and, whilst we make endeavours after virtue, mayst guard the things thus nourished.

Lesson of the Epistle of St. Paul the Apostle to the Romans, Chapter VI.

Brethren: all we who are baptized in Christ Jesus are baptized in His death. For we are buried together with Him by baptism unto death: that as Christ is risen from the dead by the glory of the Father, so we also may walk in newness of life. For if we have been planted together in the likeness of His death, we shall be also in the likeness of His resurrection. Knowing this, that our old man is crucified with Him, that the body of sin may be destroyed, to the end that we may serve sin no longer. For he that is dead is justified from sin. Now if we be dead with Christ, we believe that we shall live also together with Christ. Knowing that Christ, rising again from the dead, dies now no more, death shall no more have dominion over Him. For in that He died to sin, He died once: but in that He lives, He lives unto God. So do you also reckon that you are dead to sin, but alive unto God in Christ Jesus our Lord.

Gradual. Turn to us a little, O Lord, and be appeased with Thy servants. O Lord, Thou hast been our refuge, from generation to generation. Alleluia, Alleluia. In Thee, O Lord, have I put my trust, let me never be confounded: save me by Thy justice, and rescue me: bend Thine ear unto me: make haste to save me. Alleluia.

Sequel of the holy Gospel according to Mark, Chapter VIII

At that time: When there was a great multitude with Jesus, and had nothing to eat, calling His disciples together, He said to them: I have compassion on the multitude, for behold they have now been with Me three days, and have nothing to eat; and if I shall send them away fasting to their home, they will faint in the way: for some of them came from afar off. And His disciples answered Him: From whence can any one fill them here with bread in the wilderness? And He asked them: How many loaves have you? They said: Seven. And He commanded the people to sit down on the ground; and taking the seven loaves, giving thanks He broke, and gave to His disciples for to set before them, and they set them before the people. And they had a few little fishes; and He blessed them, and commanded them to be set before them. And they did eat and were filled, and they took up that which was left of the fragments, seven baskets. And they that had eaten were about four thousand: and He sent them away.

Take notice of the condition specified in our Gospel, as necessary for those who aspire to such nourishment as that. “It is not,” says Saint Ambrose, “to lazy people, nor to them that live in cities, nor to them that are great in worldly honours, but to them that seek Christ in the desert, that is given the heavenly nourishment: they alone who hunger after it are received by Christ into a participation of the Word and of God’s kingdom.” The more intense their hunger, the more they long for their divine object and for no other, the more will the heavenly food strengthen them with light and love, the more will it satiate them with delight.

All the truth, all the goodness, all the beauty of created things, are incapable of satisfying any single soul; it must have God. So long as man does not understand this, everything good or true that his senses and his reason can provide him with, so far from being able to satiate him, is ordinarily nothing more than a distraction from the one object that can make him the happy being he was created to be, and a hindrance to his living the true life which God willed him to attain. Observe how our Lord waits for all his human schemes to fail, and then He will be his helper, if he will but permit Him.

The men of our today’s Gospel are not afraid to abide with Him in the desert, and put up with the consequent privations of meat and drink; their faith is greater than that of their brethren who have preferred to remain in their homes in the cities, and has raised them so much the higher in the order of grace; for that very reason, our Lord would not allow them to admit anything of a nature to interfere with the divine food He prepares for their souls.

When the Jewish people were led forth by Moses from Egypt, they said: “The Lord God hath called us; we will go three days’ journey into the wilderness, to sacrifice unto the Lord our God.” In like manner, the disciples of Jesus have retired into the wilderness, as our today’s Gospel tells us; and, after three days, they have been fed with a miraculous bread, which foretold the victim of the great sacrifice, of which the Hebrew one was a figure. In a few moments, both the bread and the figure are to make way, on the altar before which we are standing, for the highest possible realities.

Let us, then, go forth from the land of bondage of our sins; and since our Lord’s merciful invitation comes to us so repeatedly, let our souls get the habit of keeping away from the frivolities of earth, and from worldly thoughts. And now as we sing the Offertory-anthem, let us beseech our Lord that He may graciously give us strength to advance farther into that interior desert, where He is always the most inclined to hear us, and where He is most liberal with His graces.