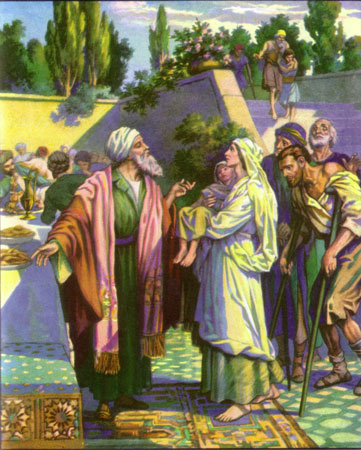 Sunday within the octave of Corpus Christi

Let us adore Christ, the King, who rules the nations: who gives fatness of spirit to them that eat Him.

The Eucharist has been instituted for the very purpose of ceaselessly applying, here on earth, the reality of Christ’s Sacrifice. Today, therefore, we will turn our thoughts upon this Sacrifice, as it is in its own self; this will enable us the better to understand how it is continued in the Church.

God has a right to His creature’s homage. If earthly kings and lords may claim from their vassals this recognition of their sovereignty, the sovereign dominion of the great and first Being, the first cause and last end of all things, demands it, on an infinitely just title, from beings called forth from nothing by His almighty goodness. And, just as by the rent or service which accompanies it, the homage of vassals implies, together with the avowal of their submission, the real, the effective declaration that it is from their liege-lord that they hold their property and rights; so the act, whereby the creature, as such, subjects himself to his Creator, should adequately manifest, by and of itself, that he acknowledges Him as the Lord of all things, and the Author of life.

Moreover, if, by the infringement of His commands, he has deserved death, and only lives because of the infinite mercy of this his sovereign Lord, then, his act of homage or fealty will not be complete, unless it also express an avowal of his guilt, and the justice of the punishment. Such is the true notion of Sacrifice, so called, because it sets apart from the rest of similar beings, and makes sacred, the offering whereby it is expressed: for spirits purely immaterial, the offering or oblation will be interior and exclusively spiritual; but, as regards man, this oblation must be spiritual, and, at the same time, material, for, being composed of a soul and a body, he owes homage to his God for both.

Sacrifice may not be offered but to the one true God, for it is the effective acknowledgment of the Creator’s sovereign dominion, and of that glory which belongs to Him, and which He will not make over to another. It is essential to religion, be the state that of innocence or of fall; for religion, the queen of moral virtues, whose object is the worship due to God, necessarily demands Sacrifice, as its own adequate exercise and expression. Eden would have witnessed this Sacrifice offered by unfallen man; it would have been one of adoration and thanksgiving; its material portion would have been that garden’s richest fruits, those symbols of the divine fruit, promised by the tree of life; sin would not have put its own sad stamp on such Sacrifice, and blood would not have been required. But man fell; and, then, Sacrifice became the only means of propitiation, and the necessary centre of religion, in this land of exile. Until Luther’s time, all the nations of the earth held and lived up to this truth; and when the so-called Reformers excluded Sacrifice from religion, they took away its very basis. Nor is the duty of Sacrifice limited to man’s earthly existence; no the creature when in heaven, and in the state of glory, must still offer Sacrifice to his Creator; for he has as much and even more, obligation, when he is in the brightness of the Vision, as when he lived amid the shadows of Faith, to offer to the God who has crowned him, the homage of those gifts received.

It is by Sacrifice that God attains the end He had in view by creation, that is, His own glory.

The Lord hath become my protector, and set me at large: He hath saved me, because He loved me.

Ps. I will love Thee, O Lord, my strength: the Lord is my support, my refuge, and my deliverer.

Grant us, O Lord, both a constant love and fear of Thy holy Name: since Thou never withdrawest Thy protection from those whom Thou solidly groundest in Thy love.

O God, who, under the wonderful Sacrament, hast left us a memorial of Thy Passion: grant us, we beseech Thee, so to reverence the sacred mysteries of Thy Body and Blood, that, in our souls, we may always feel the fruit of Thy Redemption.

Lesson of the Epistle of Saint John the Apostle, 1 Ch. III.

Dearly beloved, wonder not if the world hate you. We know that we have passed from death unto life, because we love the brethren. He that loveth not, abideth in death. Whosoever hateth his brother, is a murderer. And ye know that no murderer hath eternal life abiding in himself. In this we have known the charity of God, because He hath laid down His life for us: and we ought to lay down our lives for the brethren. He that hath the substance of this world, and shall see his brother in need, and shut up his bowels from him: how doth the charity of God abide in him? My little children, let us not love in word, nor in tongue, but in deed and in truth.

In my troubles, I cried unto the Lord, and He heard me. O Lord deliver my soul from wicked lips and a deceitful tongue. Alleluia, alleluia.

O Lord my God, in Thee have I put my trust: save me from those that persecute me, and rescue me. Alleluia.

Sequel of the holy Gospel according to Luke, Ch. XIV.

At that time, Jesus spoke this parable to the Pharisees: A certain man made a great supper, and invited many. And he sent his servant, at the hour of supper, to say to them that were invited, that they should come, for now all things are ready. And they began all at once to make excuse. The first said unto him: I have bought a farm, and must needs go out and see it: I pray thee, hold me excused. And another said: I have bought five yoke of oxen, and I go to try them: I pray thee hold me excused. And another said: I have married a wife, and therefore I cannot come. And the servant returning, told these things to his lord. Then the master of the house, being angry, said unto his servant: go out quickly into the streets and lanes of the city; and bring in hither the poor, and the feeble, and the blind, and the lame. And the servant said: Lord, it is done as thou hast commanded, and yet there is room. And the lord said unto the servant: Go out into the highways, and hedges; and compel them to come in, that my house may be filled. But I say unto you, that none of those men that were invited, shall taste of my supper.