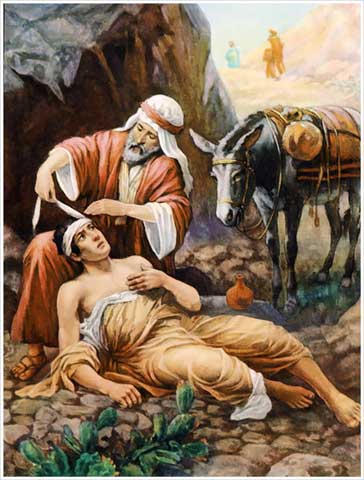 Incline unto mine aid, O God! O Lord, make haste to help me! Let mine enemies be confounded and ashamed that seek my soul. Psalm. Let them be turned backward, and blush for shame, that desire evils to me.

O almighty and merciful God, from whose gift it comes, that Thy faithful worthily and laudably serve Thee: grant us, we beseech Thee, that we may run on, without stumbling, to the things Thou hast promised us.

Lesson of the Epistle of St. Paul the Apostle to the Corinthians, 2 Chapter III.

Oh! if we did but know the gift of God! if we did but understand the supereminent dignity reserved, under the law of love, to every man of good will! Then, perhaps, our cowardice and sluggishness would, at last, go; then, perhaps, our souls would get fired with the noble ambition which turns men into Saints. At all events, we should then come to realize that Christian humility, of which we were speaking on the last two Sundays, is not the vulgar grovelling of a low-minded man, but the glorious entrance upon the way which leads, by divine union, to the only true greatness. Are not those men inconsistent and senseless who, longing by the very law of their nature for glory, go seeking it in the phantoms of pride, and allow themselves to be diverted, by the baubles of vanity, from the pursuit of those real honours which eternal Wisdom had destined for them! And those grand honours were to have been heaped upon them, not only in their future heaven, but even here in their earthly habitation; and God and His Saints were to have been admiring and applauding spectators!

In the name, then, of our dearest and truest interests, let us give ear to our apostle, and share his heavenly enthusiasm. We shall understand his exquisite teaching all the better, if we read the sequel to the few lines assigned for today’s Epistle. It is but fully carrying out the wishes of the Church, when her children, after or before assisting at her liturgical services, take the sacred Scriptures, and read for themselves the continuation of passages, which are necessarily abridged during the public celebrations. It were well, if they did this all through the year. What a fund of instruction they would thus acquire! Today, however, there is an additional motive for the suggestion, inasmuch as this second Epistle to the Corinthians is brought before us for the first and only time during this season of the liturgy.

But let us examine what is this glory of the new Testament, which so fills the apostle with ecstasy, and, in his mind, almost entirely eclipses the splendour of the old. Splendour there undoubtedly was in the Sinai covenant. Never had there been such a manifestation of God’s majesty, and omnipotence, and holiness, as on that day, when, gathering together, at the foot of the mount, the descendants of the twelve sons of Jacob, He mercifully renewed, with this immense family, the covenant formerly made with their fathers, and gave them His Law in the extraordinarily solemn manner described in the Book of Exodus. And yet, that Law, engraven as it was on stone by God’s own hand, was not, for all that, in the hearts of the receivers; neither did its holiness prevent, though it condemned, sin – sin which reigns in man’s heart. Moses, who carried the divine writing, came down from the mount, having the rays of God’s glory glittering on his face; but this glory was not to be shared in by the people of whom he was the head; it was for himself alone, as was likewise the privilege he had enjoyed of speaking with God face to face; it ceased with him, thus signifying, by its short duration, the character of that ministration, which was to cease on the coming of the Messiah, just as the night’s borrowed light vanishes when the day appears. And, as it were, the better to show that the time was not as yet come, when God would manifest His glory – the children of Israel were not able to gaze steadfastly on the face of Moses; so that, when he had to speak to the people, he had need to put on a veil. Though a mere borrowed light, the brightness of Moses’ face represented the glory of the future Covenant, whose splendour was to shine, not, of course, externally, but in the hearts of us all, by giving us the light of the knowledge of the glory of God, in the face of Christ Jesus. Light, living and life-giving, which is none other than the divine Word, the Wisdom of the Father, and which the energy of the sacraments, seconded by contemplation and love, makes to pass from the Humanity of our divine Head to the very recesses of our souls.

I will bless the Lord at all times: His praise shall be always in my mouth. In the Lord shall my soul be praised: let the meek hear and rejoice. Alleluia, alleluia. O Lord, the God of my salvation, I have cried, in the day and in the night, before Thee. Alleluia.

Sequel of the holy Gospel according to Luke, Chapter X.

At that time: Jesus said to His disciples: Blessed are the eyes that see the things which you see. For I say to you, that many prophets and kings have desired to see the things that you see, and have not seen them: and to hear the things that you hear, and have not heard them. And behold, a certain lawyer stood up, tempting Him, and saying: Master, what must I do to possess eternal life? But He said to him: What is written in the law? How do you read? He answering said: Thou shalt love the Lord thy God with thy whole heart, and with thy whole soul, and with all thy strength, and with all thy mind: and thy neighbour as thyself. And He said to him: You have answered right: do this and you shall live. But he willing to justify himself, said to Jesus: And who is my neighbour? And Jesus answering said: A certain man went down from Jerusalem to Jericho, and fell among robbers, who also stripped him, and having wounded him, went away, leaving him half dead. And it chanced that a certain priest went down the same way: and seeing him, passed by. In like manner also a levite, when he was near the place, and saw him, passed by. But a certain Samaritan, being on his journey, came near him; and seeing him, was moved with compassion. And going up to him, bound up his wounds, pouring in oil and wine; and setting him upon his own beast, brought him to an inn, and took care of him. And the next day, he took out two pence, and gave them to the host, and said: Take care of him; and whatsoever you shall spend over and above, I at my return will repay you. Which of these three in your opinion was neighbour to him that fell among the robbers? But he said: He that showed mercy to him. And Jesus said to him: Go, and do yourself in like manner.

If all perfection be included in love, – if, without love, no Virtue produces fruit for heaven, – it is important for us to remember, that love is not of the right kind unless it includes our neighbour; and it is only after stating this particular, that St. Paul affirms that love fulfills the whole law, and that love is the plenitude of the law. Thus we find that the greater number of the precepts of the Decalogue concern our duties to our neighbour; and we are told, that the love we have for God is only then what it ought to be, when we love not only Him, but also what He loves, that is, when we love man whom He made to His own likeness. Hence, the apostle St. Paul does not explicitly distinguish, as the Gospel does, between the two precepts of love. He says: “All the law is fulfilled in one sentence: Thou shalt love thy neighbour as thyself.”