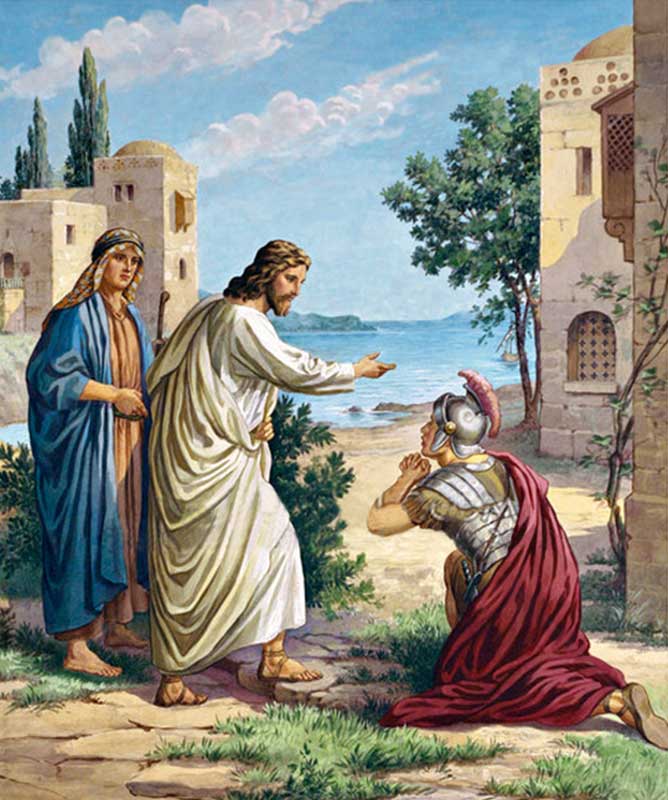 All things whatsoever Thou hast done unto us, O Lord, Thou hast done by a just judgment: for we have sinned, and disobeyed Thy commandments. But glorify Thy name and deal with us according to Thy great mercy. Psalm. Blessed are the undefiled in the way, who walk in the law of the Lord. Glory be to the Father, etc.

The divine forgiveness, which restores the soul to purity and peace, is the indispensable preparation for the sacred marriage-feast; for the wedding garment of its guests must, under pain of exclusion, be without a stain; their heart, too, must be without bitterness, lest it should cause the Bridegroom to be offended. Let us implore this precious pardon. Our Lord is all the more ready to grant it us, when we ask it through His beloved bride, the Church, our mother. Let us unite our voices with hers, and say her Collect.

Being appeased, O Lord, bestow pardon and peace upon Thy faithful; that they being also cleansed from all their offences, may serve Thee with a secure mind.

Lesson of the Epistle of Saint Paul the Apostle to the Ephesians, Chapter V.

Brethren: See, therefore, how you walk circumspectly, not as unwise, but as wise: redeeming the time, because the days are evil. Wherefore become not unwise, but understanding what is the will of God. And be not drunk with wine, wherein is luxury, but be ye filled with the holy Spirit, speaking to yourselves in psalms and hymns, and spiritual canticles, singing and making melody in your hearts to the Lord: giving thanks always for all things in the name of our Lord Jesus Christ to God and the Father. Being subject one to another in the fear of Christ.

As the nuptials of the Son of God approach their final completion, there will be, also, on the side of hell, a redoubling of rage against the bride, with a determination to destroy her. The dragon of the Apocalypse, the old serpent who seduced Eve, will cast out water, as a river, from his mouth – that is, he will urge on all the passions of man, that they may league together for her ruin. But, do what he will, he can never weaken the bond of the eternal alliance; and, having no power against the Church herself, he will turn his fury against the last children of the new Eve, who will have the perilous honour of those final battles, which are described by the prophet of Patmos (Saint John, the Evangelist).

It is then, more than at all previous times, that the faithful will have to remember the injunction given to us by the apostle in today’s Epistle. They will have to comport themselves with that circumspection which he enjoins, taking every possible care to keep their understanding, no less than their heart, pure, in those evil days. Supernatural light will, in those days, not only have to withstand the attacks of the children of darkness, who will put forward their false doctrines; it will, moreover, be minimized and falsified by the very children of the light yielding on the question of principles; it will be endangered by the hesitations, and the human prudence, of those who are called far-seeing men. Many will practically ignore the master-truth, that the Church never can be overwhelmed by any created power. May they do remember that our Lord has promised to uphold His Church even to the end of the world. To the insolent and blasphemous things which are then to be spoken by the beast, these determined servants of God will give, for their brave answer, the cry of Saint Michael, which he uttered against satan, the helper of the beast: ‘Who is like unto God?’

The eyes of all do hope in Thee, O Lord: and Thou givest them meat in due season. Thou openest Thy hand, and fillest every living creature with Thy blessing. Alleluia, alleluia. My heart is ready, O God, my heart is ready; I will sing, and give praise to Thee, my glory. Alleluia.

Sequel of the holy Gospel according to John, Chapter IV.

At that time: There was a certain ruler whose son was sick at Capharnaum. He having heard that Jesus had come from Judea into Galilee, went to Him, and prayed Him to come down and heal his son, for he was at the point of death. Jesus therefore said to him: Unless you see signs and wonders you believe not. The ruler said to Him: Lord, come down before that my son die. Jesus said to him: Go your way, your son lives. The man believed the word which Jesus said to him, and went his way. And as he was going down, his servants met him: and they brought word, saying, that his son lived. He asked therefore of them the hour wherein he grew better. And they said to him: Yesterday at the seventh hour the fever left him. The father therefore knew that it was at the same hour that Jesus said to him: Your son lives; and himself believed, and his whole house.