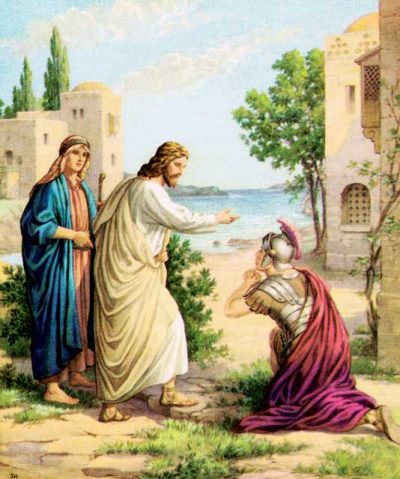 There came to Jesus a centurion, beseeching Him, and saying: Lord, my servant lies at home sick of the palsy, and is grievously tormented. And Jesus said to him: I will come and heal him. And the centurion making answer, said: Lord, I am not worthy that Thou shouldst enter under my roof: but only say the word, and my servant shall be healed.

Adore God, all ye His Angels: Sion heard and was glad, and the Daughters of Juda rejoiced. Psalm. The Lord has reigned, let the earth rejoice, let many islands be glad.

O Almighty and Eternal God, mercifully behold our weakness, and stretch forth the right hand of Thy majesty to protect us.

Lesson of the Epistle of Saint Paul the Apostle to the Romans, Ch. XII.

Brethren, be not wise in your own conceits. To no man rendering evil for evil. Providing good things not only in the sight of God, but also in the sight of all men. If it be possible, as much as in you, having peace with all men. Not revenging yourselves, my dearly beloved, but give place unto wrath. For it is written: “Revenge to Me, I will repay,” said the Lord. But if your enemy be hungry, give him to eat: if he thirst, give him to drink: for doing this, you shall heap coals of fire upon his head. Be not overcome by evil, but overcome evil by good.

This love of our neighbour, recommended to us by the Apostle, is a consequence of that universal brotherhood, which our Saviour, by His Birth, brought us from heaven. He came to establish peace between heaven and earth; men, therefore, ought to be at peace one with another. Our Lord bids us not to be overcome by evil, but to overcome evil by good: – and did not He first practise this, by coming among us, who were children of wrath, that He might make us children of adoption, by His humiliations and His sufferings?

The Gentiles shall fear Thy Name, O Lord, and all the kings of the earth Thy glory. For the Lord hath built up Sion, and He shall be seen in His glory. Alleluia, alleluia. The Lord hath reigned, let the earth rejoice: let many islands be glad. Alleluia.

Sequel of the holy Gospel according to Matthew, Ch. VIII

At that time, when Jesus was come down from the mountain, great multitudes followed Him; and behold a leper came and adored Him, saying: Lord, if You will, You can make me clean. And Jesus stretching forth His hand, touched him, saying: I will, be made clean. And forthwith his leprosy was cleansed. And Jesus said to him: Tell no man, but go show yourself to the priest, and offer the gift which Moses commanded for a testimony unto them. And when He had entered unto Capharnaum, there came to Him a centurion, beseeching Him, and saying: Lord, my servant lies at home sick of the palsy, and is grievously tormented. And Jesus said to him: I will come and heal him. And the centurion making answer, said: Lord, I am not worthy that Thou shouldst enter under my roof: but only say the word, and my servant shall be healed. For I also am a man under authority, having under me soldiers; and I say to this one, Go, and he goes, and to another, Come, and he comes, and to my servant, Do this, and he does it. And when Jesus heard this, He marvelled, and said to them that followed Him: Amen, I say to you, I have not found so great faith in Israel. And I say unto you, that many shall come from the east and the west, and shall sit down with Abraham, and Isaac, and Jacob, in the kingdom of heaven; but the children of the kingdom shall be cast out into the exterior darkness: there shall be weeping and gnashing of teeth. And Jesus said to the centurion: Go, and as you have believed, so be it done to you. And the servant was healed at the same hour.

The human race was infected with the leprosy of sin: the Son of God touches it by the mystery of the Incarnation, and restores it to health. But, He requires that the sick man, now that he is healed, shall go and show himself to the Priest, and comply with the ceremonies prescribed by the law; and this, to show that he allows a human priesthood to co-operate in the work of our salvation. The vocation of the Gentiles, of which the Magi were the first fruits, is again brought before us in the faith of the Centurion. A Roman Soldier, and millions like him, shall be reputed as true children of Abraham, Isaac, and Jacob; while they, who are the sons of this Patriarch, according to the flesh, shall be cast out, from the feast-chamber, into the gloom of blindness; and their punishment shall be given as a spectacle to the whole earth.

Let man, then, saved as he has been by the coming of the Emmanuel, sing a hymn of praise to the power of the God, who has wrought our salvation by the strength of His almighty arm. Man had been sentenced to death; but, now that he has God for a Brother, he shall not die: he will live. And could he spend his life better than in praising the works of this God, that has saved him?

All wondered at the words that came from the mouth of God. We beseech Thee, O Lord, that we, to whom Thou vouchsafest the use of these great mysteries, may be made truly worthy to receive the benefits thereof.

Back to the Liturgy Homepage

To attract the Holy Spirit

by Saint Catherine of Siena

Short Novena to the Holy Child Jesus of Prague

The Infant Jesus of Prague manifested Himself to men in the form of a miraculous statue. Those who pray to Him with confidence are always filled with His outstanding graces.

Novena to the Holy Child Jesus of Prague

The Infant Jesus of Prague manifested Himself to men in the form of a miraculous statue. Those who pray to Him with confidence are always filled with His most special graces.

Consecration to Saint Michael the Archangel

Let us entrust ourselves to the special protection of this great Archangel who has all power against the forces of Satan.