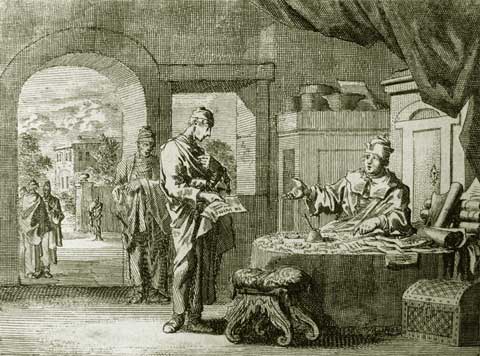 We have received Thy mercy, O God, in the midst of Thy temple: according to Thy name so also is Thy praise, unto the ends of the earth: Thy right hand is full of justice. Psalm. Great is the Lord, and exceedingly to be praised: in the city of our God, on His holy mountain.

Grant us, O Lord, we beseech Thee, the spirit of always thinking what is right; and grant us mercifully the spirit of doing it: that we, who cannot subsist without Thee, may live according to Thee. Through Christ Our Lord.

Lesson of the Epistle of St. Paul, the Apostle, to the Romans. Chapter VIII.

Brethren: We are debtors, not to the flesh, to live according to the flesh. For if you live according to the flesh, you shall die: but if by the spirit you mortify the deeds of the flesh, you shall live. For whosoever are led by the Spirit of God, they are the sons of God. For you have not received the spirit of bondage again in fear: but you have received the spirit of adoption of sons, whereby we cry: Abba (Father). For the Spirit Himself gives testimony to our spirit, that we are the sons of God. And if sons, heirs also: heirs indeed of God, and joint heirs with Christ.

Admirable is the fruitfulness of the bride; for, wonderful is the power of sanctification which she is using all through the world of various nations. Scarcely has she sprung into her beauteous existence, than she offers to her Lord and her King a new empire, consolidated in unity of love; she presents Him with a generation that is all pure in the intelligence and practice of every virtue. It is quite true, that the Holy Ghost acts directly on the souls of the newly baptized; but there is something else to be considered in the divine plan. It is this: the Word, having been made flesh, and having taken to Himself a bride (which is the visible Church on earth), whom He has made His associate in the work of man’s salvation, has willed that the invisible operation of the divine Spirit, who proceeds from Him (the Word), shall not be in its normal state, unless there be added to it the extrinsic cooperation find intervention of this His bride. Not only is the Church the depository of those all-potent formulas and mysterious rites which change man’s heart into a new soil, cleansing it from thorns and weeds, making it able to produce a hundredfold, but she also sows the seed of the divine husbandman into that same soil, by her countless modes of teaching the truth. To the Holy Ghost, indeed, a magnificent share is due of that fecundity and that social life of the Church; still, her portion of work is exquisite; it deals with the elect taken as individuals, and consists especially in getting them to profit of the divine energies of the sacraments which she administers, and in developing the germs of salvation which her teaching plants in their souls.

How important, then, and sublime will ever be that mission, which is confided to those men who are set over particular churches, as teachers or directors of souls; they represent, to these isolated congregations, the common mother of all the faithful, for, in her name, they really provide for the holy Spirit those elements upon which He is to make His all-powerful action felt. For that very same reason, woe to those times when the dispensers of the divine word, having themselves nought but halved or false principles, give but weak, shrivelled seed to the souls entrusted to them! The Holy Ghost is not bound to supply their insufficiency; ordinarily speaking, He does not supply it, for such is not the way established by Christ for the sanctification of the members of His Church.

From Jesus, then, from Jesus alone, comes all justice. Not only is supernatural justice, which supposes the infusion of sanctifying grace in the sinner’s soul, wholly from Him; but even that natural justice, of which men are so proud, and which they say is quite enough without anything else, soon leaves one who does not cling to Christ by faith and love. Our modern world has a pompous phrase about ’the independence of the human mind; let those who pretend to acknowledge no other goodness but that, go on with their boasting of being moral and honest men; but, as to us Christians, we believe what our mother the Church teaches us; and, agreeably to such teaching, we believe that ’a moral and honest man,’ that is to say, a man who lives up to all the duties which nature puts upon him, can only be such here below by a special aid of our Redeemer and Saviour Christ Jesus. With St. Paul, therefore, let us be proud of the Gospel; for, as he calls it, it is the power of God, not only to justify the ungodly, but also to enrich souls, that thirst after what is right, with an active and perfect justice.’ The just man says the same apostle,’ liveth by faith and according to the growth of his faith, so is his growth in justice. Without faith in Christ, the pretension to reach perfection in good, by one’s own power and works, produces nothing but the stagnation of pride and the wrath of God.

Be Thou unto me a God, a protector, and a place of refuge to save me. O God, in Thee have I hoped; let me, O Lord, never be confounded. Alleluia, alleluia. Great is the Lord, and exceedingly to be praised, in the city of our God, on His holy mountain. Alleluia.

Sequel of the holy Gospel according to Luke. Chapter XVI.

At that time: Jesus spoke to His disciples this parable: There was a certain rich man who had a steward: and the same was accused unto him, that he had wasted his goods. And he called him, and said to him: How is it that I hear this of You? give an account of your stewardship: for now you cannot be steward no longer. And the steward said within himself: What shall I do, because my lord takes away from me the stewardship? To dig I am not able; to beg I am ashamed. I know what I will do, that when I shall be removed from the stewardship, they may receive me into their houses. Therefore, calling together every one of his lord’s debtors, he said to the first: How much do you owe my lord? But he said: A hundred barrels of oil. And he said to him: Take your bill and sit down quickly, and write fifty. Then he said to another: And how much do You owe? Who said: A hundred quarters of wheat. He said to him: Take your bill and write eighty. And the lord commended the unjust steward, forasmuch as he had done wisely: for the children of this world are wiser in their generation than the children of light. And I say to you: Make unto you friends of the mammon of iniquity, that when you shall fail, they may receive you into everlasting dwellings.

Explanation of the Liturgy and appropriate prayers.
Preparatory Novenas, traditional devotions and practices.