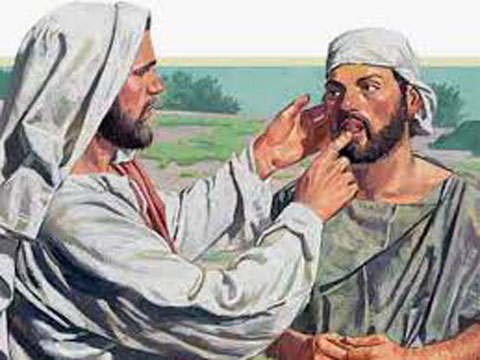 God is in His holy place, God who makes men of one soul dwell in His house: He will give virtue and strength to His people.

Ps. Let God arise and dispel His enemies, and let those who hate Him flee from before His face.

O almighty and eternal God, who, by the abundance of Your goodness, exceeds both the merits and the requests of Your suppliants: pour forth Your mercy upon us: that You may pardon what our conscience fears, and may grant what our prayer presumes not to ask.

Lesson of the Epistle of St. Paul the Apostle to the Corinthians 1 Chapter XV.

Brethren: I make known unto you the Gospel which I preached to you, which also you have received, and wherein you stand, by which also you are saved: if you hold fast after what manner I preached unto you, unless you have believed in vain. For I delivered unto you first of all, which I also received: how that Christ died for our sins according to the Scriptures: and that He was buried, and that He rose again the third day according to the Scriptures: and that He was seen by Cephas; and after that by the eleven. Then He was seen by more than five hundred brethren at once; of whom many remain until this present, and some are fallen asleep. After that He was seen by James, then by all the apostles; and last of all, He was seen also by me, as by one born out of due time. For I am the least of the apostles, who am not worthy to be called an apostle, because I persecuted the Church of God. But by the grace of God I am what I am; and His grace in me has not been void.

My heart trusted in God, and I was relieved; and my body hath recovered its strength: and I will praise Him, with my whole heart. To thee, O Lord, have I cried out: be not silent, O my God: nor depart from me. Alleluia, alleluia. Exult in God, our Helper: joyfully sing to the God of Jacob: sing a hymn of joy upon the harp. Alleluia.

Sequel of the holy Gospel according to Mark, Chapter VII.

At that time: Jesus going out of the coasts of Tyre, came by Sidon to the sea of Galilee through the midst of the coasts of Decapolis. And they bring to Him one deaf and dumb: and they besought Him that He would lay His hand upon him. And taking him from the multitude apart, He put his fingers into his ears, and spitting, He touched his tongue; and looking up to heaven, He groaned and said to him: Ephpheta, which is, Be thou opened. And immediately his ears were opened, and the string of his tongue was loosed, and he spoke right. And He charged them that they should tell no man. But the more He charged them, so much the more a great deal did they publish it. And so much the more did they wonder, saying: He hath done all things well; He hath made both the deaf to hear and the dumb to speak.

Our Jesus groans when they have brought this poor creature before Him. He is grieved at seeing the cruelties the enemy has inflicted on this His own privileged being, this beautiful work, of which He Himself served as model and type to the blessed Trinity, at the beginning of the world. Raising up to heaven those eyes of His sacred Humanity – those eyes whose language has such resistless power – He sees the eternal Father acquiescing in the intentions of His own merciful compassion. Then, resuming the exercise of that creative omnipotence which, in the beginning, had made all things to be very good, and all His works to be perfect, He, as God and as the Word, utters the mighty word of restoration: Ephpheta! Be thou opened! Nothingness, or rather (in this instance) ruin, which is worse than nothingness, obeys the well-known voice; the ears of the poor sufferer are opened, joyfully opened to the teachings, which his delighted mother the Church pours into them. She is all the gladder, because it is her prayers that have won this deliverance; and he, to whom faith comes now through hearing, finding that his tongue can speak, speaks, or rather sings, a canticle of praise to his God.

And yet, as we were observing, our merciful Lord, by this cure, aims not so much at showing the power of His divine word as at giving a glorious teaching to His followers; He wishes to reveal to them, under certain visible symbols, the invisible realities produced by His grace in the secret of the sacraments. It is for the sake of such teaching that the Gospel has mentioned such an apparently trifling detail as this –that when the deaf and dumb man was brought before Him, He took him apart– apart, so to say, from the multitude of the noisy passions and the vain thoughts which had made him deaf to heavenly truths. After all, would there be much good in curing him if the occasion of his malady were not removed, and he were to relapse perhaps that same day? So, then, having by this separation taken precautions for the future, Jesus inserts into the man’s ears His own divine fingers which bring the Holy Ghost, and make to penetrate right to the ears of his heart the restorative power of this Spirit of love. And finally, more mysteriously, because the truth which was to be expressed is more profound, He touches with the saliva of His sacred mouth that tongue which had become incapable of giving glory and praise; and Wisdom (for it is she that is here mystically signified) –Wisdom, that comes forth from the mouth of the Most High, and flows for us from the Saviour’s fountains as a life-giving drink– opens the mouth of the dumb man, just as she makes eloquent the tongues of speechless infants.