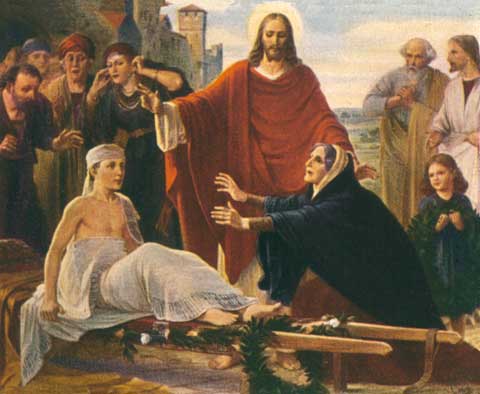 Incline Thine ear, O Lord, unto me, and hear me: save Thy servant, O my God, who hopes in Thee; have mercy on me, O Lord, for I have cried to Thee all the day. Psalm. Give joy to the soul of Thy servant: for to Thee, O Lord, have I lifted up my soul. Glory be to the Father…

May Thy continued mercy, O Lord, cleanse and defend Thy Church; and because, without Thee, she cannot keep safe, may she always be governed by Thy gift. Through Christ Our Lord.

Lesson of the Epistle of St. Paul, the Apostle, to the Galatians, Chapters V and VI.

Brethren: If we live in the Spirit, let us also walk in the Spirit. Let us not be made desirous of vain-glory, provoking one another, envying one another. Brethren, if a man be overtaken in any fault, you who are spiritual, instruct such a one in the spirit of meekness, considering yourself, lest you also be tempted. Bear ye one another’s burdens: and so you shall fulfil the law of Christ. For if any man think himself to be something, whereas he is nothing, he deceives himself. But let every one prove his own work, and so he shall have glory in himself only, and not in another. For every one shall bear his own burden. And let him that is instructed in the word, communicate to him, that instructed him, in all good things. Be not deceived, God is not mocked. For what things a man shall sow, those also shall he reap. For he that sows in the flesh, of the flesh also shall reap corruption. Bat he that sows in the spirit, of the spirit shall reap life everlasting. And in doing good, let us not fail. For in due time we shall reap not failing. Therefore, whilst we have time, let us work good to all men, but especially to those who are of the household of the faith.

Prostrated on the ground, let us cry out from the heartfelt conviction of the miseries of human nature: “Have mercy on me, O God, according to Thy great mercy! for I was conceived in iniquities, and my sin is ever before me!ˮ

To practise bodily mortification, with a view to get the reputation of being saints, is it not doing what St. Paul here calls sowing in the flesh, that in due time—that is, on the day when the intentions of our hearts will be made manifest—we may reap, not life and glory everlasting, but endless disgrace and shame? Among the works of the flesh mentioned in last Sunday’s Epistle, we found contentions, dissensions, jealousies, all of which are the ordinary outcome of this vain-glory, against which the apostle is now warning us. The production of such rotten fruits would be an unmistakable sign that the heavenly sap of grace had gone from our souls, and that in its stead there had been brought the fermentation of sin; and that now, having made ourselves slaves as of old, we must tremble because of the penalties threatened by God’s law. God is not mocked; and as to the confidence which generous fidelity of love imparts to those who live by the Spirit, it would, in the case we are now supposing, be but a hypocritical counterfeit of the holy liberty of the children of God. They alone are His children, whom the holy Spirit leads in charity; those others are led on by the flesh, and such cannot please God.

Would to God we could ever have ringing in our ears the saying of the apostle: Whilst we have time, let us work good to all men! For the day will come (and it is not so very far off) when the angel, carrying the mysterious book, and having one foot on the earth and the other on the sea, shall make his mighty voice as that of a lion heard through the universe, and, with his hand lifted up towards heaven, shall swear by Him that liveth for ever and ever, that time shall be no more. Then will man reap with joy what he shall have sown in tears; he failed not, he grew not weary of doing good while in the dreary land of his exile; still less will he ever tire of the everlasting harvest, which is to be in the living light of the eternal day.

It is good to give praise to the Lord: and to sing to Thy name, O Most High! To show forth Thy mercy in the morning, and Thy truth in the night. Alleluia, alleluia. For the Lord is a great God, and a great King over all the earth. Alleluia. Alleluia.

Sequel of the holy Gospel according to Luke, Chapter VII.

At that time: Jesus went into a city that is called Naim: and there went with Him His disciples, and a great multitude. And, when He came nigh to the gate of the city, behold a dead man was carried out, the only son of his mother; and she was a widow: and a great multitude of the city was with her. Whom when the Lord had seen, being moved with mercy towards her, He said to her: Weep not! And He came near, and touched the bier. And they that carried it stood still. And He said: Young man! I say to you arise. And he that was dead, sat up, and began to speak. And He gave him to his mother. And there came a fear on them all: and they glorified God, saying: A great Prophet has risen up among us, and God has visited His people!

The manifold sins committed by the Church’s children against the divine precepts show that they who so sin are rotten members, members alien to the body of Christ. Nevertheless the Church forgets not that she gave them birth in the laver of salvation; she forgets not the promises they then made to renounce the devil, and the pomps of the world, and all sin. Therefore does she weep over their fall, being their true mother, and never losing the hope of winning their resurrection by her tears. Oh what a flood of tears is thus every day shed before God! What fervent prayers does this spotless virgin send, by the ministry of the holy angels, up to Christ, who is the salvation of sinners! In the secret of hearts, in lonely retreats, as well as in her public temples, she cries out to the divine mercy, that they, who are now buried in the filth of vice, may be restored to life. Who shall tell the joy of her heart, when she receives back living, the children she mourned over as dead? If the conversion of sinners is such joy to heaven, what must it be to such a mother? According to the multitude of the sorrows of her heart, so will be the consolations, giving joy to her soul.

It is the duty of us Christians, who by God’s mercy have been preserved from the general decay, to share in the anguish of our mother, the Church; we should humbly but fervently co-operate with her in all her zealous endeavours to reclaim our fallen brethren. We surely can never be satisfied with not being of the number of those senseless sons who are a sorrow to their mother, and despise the labour of her that bore them. Had we not the holy Spirit to tell us how he that honours his mother is as one that lays up to himself a treasure, the thought of what our birth cost her would force us to do everything that lies in our power to comfort her. She is the dear bride of the Incarnate Word; and our souls, too, aspire to union with Him. Let us prove that such union is really ours by doing as the Church does; that is, by showing in our acts the one thought, the one love which the divine Spouse always imparts to souls that enjoy holy intimacy with Him, because there is nothing He Himself has so much at heart; the thought of bringing the whole world to give glory to His eternal Father, and the love of procuring salvation for sinners.