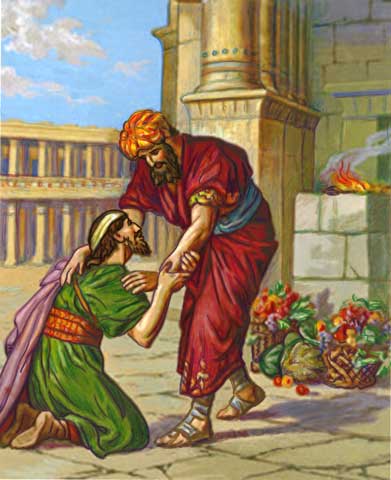 Fifth Sunday after Pentecost: The Forgiveness of offenses.

Hear, O Lord, my voice, with which I have cried to Thee: be Thou my helper: forsake me not, do not Thou despise me, O God, my Saviour! Psalm. The Lord is my light and my salvation; whom shall I fear?

The blessings promised to David as recompense for his combats were but a poor figure of those which await in heaven the vanquishers of the world, the flesh, and the devil. They are to be kings for ever; on their thrones, they are to enjoy the fullness of those inebriating and heavenly delights, some drops of which are permitted by the divine Spouse to be tasted, here below, by souls that are faithful to Him. Let us, therefore, love Him, who thus recompenses our love; and since, of ourselves, we can do nothing, let us, through the Spouse, ask the giver of every best gift to bestow on us the perfection of divine charity.

O God, who hast prepared invisible good things for them that love Thee, pour forth into our hearts an affectionate love for Thee: that, loving Thee, in all things, and above all things, we may come to the enjoyment of Thy promises, which surpass all that we could desire.

Lesson of the Epistle of St. Peter the Apostle, 1 Chapter III.

Dearly beloved: Be ye all of one mind, having compassion one of another, being lovers of the brotherhood, merciful, modest, humble: not rendering evil for evil, nor railing for railing, but contrariwise, blessing: for unto this are you called, that you may inherit a blessing. For, he that will love life, and see good days, let him refrain his tongue from evil, and his lips that they speak no guile. Let him decline from evil, and do good: let him seek after peace, and pursue it: because the eyes of the Lord are upon the just, and his ears unto their prayers; but the countenance of the Lord upon them that do evil things. And who is he that can hurt you, if you be zealous of good? But if also you suffer any thing for justice’ sake, blessed are ye. And be not afraid of their fear, and be not troubled. But sanctify the Lord Christ in your hearts.

Look down, O God, our protector; and look down upon Thy servants.

O Lord God of hosts, graciously hear the prayers of Thy servants.

O Lord, in Thy might shall the king rejoice: and in Thy salvation shall he exult exceedingly. Alleluia.

Union of true charity, concord, and peace, which must, at every cost, be kept up as the condition for their being happy both now and for ever – such is the substance of the instructions addressed by Simon, now Peter, to those other chosen stones, which rest upon him, and constitute that august temple to be presented by the Son of Man to the glory of the Most High. Do not the solidity and duration of even earth’s palaces depend on the degree of union between the materials used in their structure? Again, it is union which gives strength and beauty to all the parts of this immense universe; let there be a cessation of that mutual attraction which combines them together in one harmonious whole, let there be a suspension of that cohesion which holds their atoms together, and the whole universe will return to dust. The Creator has made peace in His high places. The charity which is poured forth into our hearts at the moment of our Baptism is an emanation of the very love that reigns in the bosom of the blessed Trinity; for the workings of the holy Spirit in the saints have this for their aim: to make them enter into a participation in the divine energies. Having become the life of the regenerate soul, the divine fire penetrates her whole being with God, and communicates, to her created and finite love, the direction and the power of the flame that is everlasting and divine. So that, henceforward, the Christian must love as God loves; his charity is then only what it should be, when it takes in everything that God loves. Now, such is the ineffable friendship established by the supernatural order between God and His intellectual creatures, that He vouchsafes to love them with the love wherewith He loves Himself; and therefore, our charity should include and embrace, not only God Himself, but, moreover, all those beings whom He has called to share, if they will, in His own infinite happiness. This will give us to understand the grandeur and incomparable power of the union, in which the Holy Ghost has established the Church. We are not surprised that its bonds should be stronger than death, and its cohesion be proof against all the power of hell.

But let us also understand the importance and the necessity of mutual union for all Christians. There must be among them that love of the brother-hood which is so frequently and so strongly recommended by the apostles, the co-operators of the Spirit in the building up of the Church. The keeping aloof from schism and heresy, of whose terrible consequences we were told in last Sunday’s Gospel; the repression of hatred and jealousy; no, these are not enough to make us become useful members of the Church of Christ: we must, moreover, have a charity which is effective, and devoted, and persevering, and brings all souls and hearts into true union and harmony; a charity, which, to be worthy of the name, must be warm-hearted and generous, for it must make us see God in our fellow-men, and that will bring us to look upon their happiness or misfortunes as though they were our own. Let us, therefore, as St. John counsels us, measure the perfection of our love for God by the love we have for our neighbours: then only shall we have God abiding within us; then only shall we be enabled to enjoy the unspeakable mysteries of divine union with Him, who only unites Himself with His elect, in order to make both them and Himself one magnificent temple to the glory of His Father.

Sequel of the holy Gospel according to Matthew, Chapter V.