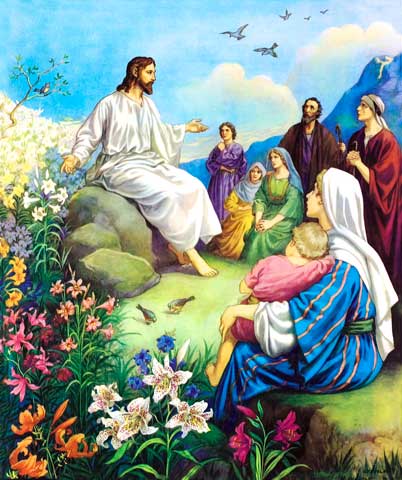 Fourteenth Sunday after Pentecost – No Man Can Serve Two Masters

Behold, O God, our protector, and look on the face of Thy Christ; for, better is one day in Thy courts, above thousands. Psalm. How lovely are Thy tabernacles, O Lord of hosts! My soul longs and faints for the courts of the Lord.

Preserve, O Lord, we beseech Thee, Thy Church by Thy constant mercy; and whereas, without Thee, human mortality fails, may it, by Thine aid, be ever delivered from what things are hurtful, and be directed towards such as are salutary. Through Christ Our Lord…

Lesson of the Epistle of Saint Paul the Apostle to the Galatians, Chapter V.

Brethren: Walk in the spirit, and you shall not fulfil the lusts of the flesh. For the flesh lusts against the spirit; and the spirit against the flesh: for these are contrary one to another: so that you do not the things that you would. But if you are led by the spirit, you are not under the law. Now the works of the flesh are manifest, which are, fornication, uncleanness, immodesty, luxury, idolatry, witchcrafts, enmities, contentions, emulations, wraths, quarrels, dissensions, sects, envies, murders, drunkenness, revellings, and such like. Of the which I foretell you, as I have foretold to you, that they who do such things shall not obtain the kingdom of God. But the fruit of the Spirit is charity, joy, peace, patience, benignity, goodness, longanimity, mildness, faith, modesty, continency, chastity. Against such there is no law. And they that are Christ’s have crucified their flesh with the vices and concupiscences.

Penance is a debt of justice, incumbent on the sinner; mortification is a duty commanded by prudence; which duty becomes that of every Christian who is not foolish enough to pretend to be out of the reach of concupiscence. Is there anyone living who could honestly say that he has fully acquitted himself of these two duties, that he has satisfied the claims of God’s justice, and that he has stifled every germ of his evil passions? All spiritual masters, without exception, teach that no man who is desirous either of perfection or of salvation should limit himself to the rules of simple temperance, that cardinal virtue which forbids excess in pleasures of any kind. This, they tell us, is not enough; and that the Christian, taking up another virtue, namely fortitude, must from time to time refuse himself even lawful gratifications; must impose privations on himself which are not otherwise of obligation; must even inflict punishment on himself in the manner and measure permitted him by a discreet director.

And ought it not to be thus? Ought not the cross to be most dear to men? Yes, unless we hold that Christianity and divine love have entirely disappeared from this world. How is it possible to love Jesus, the Man of sorrows, and not love His sufferings? Can we say that we are following in His footsteps if we are not on the road to Calvary? “If any man will come after Me,ˮ says Jesus, “let him deny himself, and take up his cross, and follow Me!ˮ And the Church, who is one with her divine Spouse –the Church who completes Him in all things, and, therefore, continues through all ages His life of expiation and atonement– puts on her children the sublime task which the apostle thus expresses: “I fill up those things that are wanting of the sufferings of Christ, by suffering in my flesh for His body, which is the Church. ˮ

We are members of a Head who was crowned with thorns; can we pretend to have nothing but pleasures and flowers? Let us not forget that all the Saints must, when in heaven, be likenesses of the new Adam; and that the eternal Father admits no one into His house, who is not conformable to the image of His Son.

Sequel of the holy Gospel according to Matthew, Chapter VI.

At that time: Jesus said to His disciples: No man can serve two masters. For either he will hate the one, and love the other: or he will sustain the one, and despise the other. You cannot serve God and mammon (the god of riches). Therefore I say to you: Be not solicitous for your life, what you shall eat, nor for your body, what you shall put on. Is not the life more than the meat, and the body more than the raiment? Behold the birds of the air, for they neither sow, nor do they reap, nor gather into barns, and your heavenly Father feeds them. Are not you of much more value than they? And which of you, by taking thought, can add to his stature one cubit? And for raiment why are you solicitous? Consider the lilies of the field how they grow: they labour not, neither do they spin. But I say to you, that not even Solomon in all his glory was arrayed as one of these. And if the grass of the field, which is today, and tomorrow is cast into the oven, God does so clothe; how much more you, O ye of little faith? Be not solicitous therefore, saying: What shall we eat, or what shall we drink, or wherewith shall we be clothed? For after all these things do the heathens seek. For your Father knows that you have need of all these things. Seek ye therefore first the kingdom of God, and His justice, and all these things shall be added unto you.

The supernatural life can never be healthy in men’s souls, unless it triumph over the three enemies, which Saint John calls: concupiscence of the flesh, concupiscence of the eyes, and the pride of life. As to the first of these, our Epistle has been instructing us upon the obstacle it raises against the action of the Holy Spirit, and on the means we are to adopt for surmounting it. Pride of life is overcome by humility, on which the Church has several times spoken to us during the previous Sundays. The Gospel which has just been read to us is the condemnation of the concupiscence of the eyes – that is, attachment to the goods of this world which, of themselves, are goods but in name and appearance.

No man, says our Lord, can serve two masters; and these two masters are, God and mammon. Mammon means riches. Riches are not, of their own nature, bad. When lawfully acquired, and used agreeably to the designs of God, riches help the possessor to gain true goods for his soul; he stores up for himself, in the kingdom of his eternal home, treasures, which neither thieves nor rust can reach. Ever since the Incarnation, wherein the divine Word espoused poverty to Himself, it is the poor that are heaven’s nobility. And yet, the mission of the rich man is a grand one: he is permitted to be rich in order that he may be God’s minister to make all the several portions of material creation turn to their Creator’s glory. God graciously vouchsafes to entrust into his hands the feeding and supporting of the dearest of His children, that is, the poor, the indigent and suffering members of His Christ. He calls him to uphold the interests of His Church, and be the promoter of works connected with the salvation of men. He confides to him the keeping up of the beauty of His temples.

Happy that man, and worthy of all praise, who thus directly brings back to the glory of their Maker the fruits of the earth, and the precious metals she yields from her bosom! Let not such a man fear: it is not of him that Jesus speaks those anathemas uttered so frequently by Him against the rich ones of this world. He has but one Master – the Father who is in heaven, whose steward he humbly and gladly acknowledges himself to be. Mammon does not dominate over him; on the contrary, he makes her his servant, and obliges her to minister to his zeal in all good works. The solicitude he takes in spending his wealth in acts of justice and charity, is not that which our Gospel here blames; for, in all such solicitude, he is but following our Lord’s precept, of seeking first the kingdom of God; and the riches which pass through his hands in the furtherance of good works, do not distract his thoughts from that heaven where his heart is, because his true treasure is there.

It is quite otherwise when riches, instead of being regarded as a simple means, become the very end of a man’s existence, and that to such an extent as to make him neglect, yea, and sometimes forget, his last end. “The ways of every covetous man,ˮ says the Scripture, destroy the souls of the possessors. The apostle explains this by saying that the love of money drives a man into temptation and the snares of the devil, by the countless unprofitable and hurtful desires it excites within him; it drowns men in destruction and perdition, making them even barter away their faith. And yet, the more an avaricious man gets, the less he spends. To nurse his treasure, to gaze upon it, to be thinking of it all day and night long, when obliged to go from home – that is what he lives for; and his money becomes at last his idol. Yes, mammon is not merely his master, whose commands are obeyed before all others, but it is his god, before which he sacrifices friends, relatives, country, and himself, for he devotes, and, as it is said in Ecclesiasticus, throws away his whole soul and body to his idol. Let us not be astonished at our Gospel declaring that God and mammon are irreconcilable enemies; for, who was it but mammon that had our Lord Jesus sacrificed on its hateful altar, for thirty pieces of silver? Of all the devils in hell, is there one whose hideous guilt is deeper than the fallen angel who prompted Judas to sell the Son of God to His executioners? It is the avaricious who alone can boast of deicide! The vile love of money, which the apostle defines as the root of all evils, can lay claim to having produced the greatest crime that was ever perpetrated!