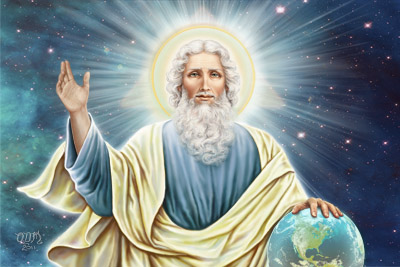 January 1 – Mass of the Eternal Father

Blessed be the God and Father of our Lord Jesus Christ, who has blessed us with every spiritual blessing on high in Christ. – Psalm. Praise the Lord, all ye nations, proclaim His glory, all ye peoples. Glory be to the Father.

Oremus
O heavenly and eternal Father, deign to accept the love and adorations of Thy children on earth, and grant them to live ever united to Thee by perfect conformity to Thy Will, following the example of Thy beloved Daughter, the Virgin Mary, thus to merit to praise and adore Thy divine and eternal Fatherhood in heaven. Through Jesus Christ, Thy beloved Son, our Lord, who, being God, liveth and reigneth with Thee in the unity of the Holy Ghost, forever and ever. – Amen.

Reading of the Epistle of the blessed Apostle Paul to the Ephesians. Eph. 1:3-14.
Blessed be the God and Father of our Lord Jesus Christ, who has blessed us with every spiritual blessing on high in Christ. Even as He chose us in Him before the foundation of the world, that we should be holy and without blemish in His sight in love. He predestined us to be adopted through Jesus Christ as His sons, according to the purpose of His Will, unto the praise of the glory of His grace, with which He has favored us in His beloved Son. In Him we have redemption through His blood, the remission of sins, according to the riches of His grace. This grace has abounded beyond measure in us in all wisdom and prudence, so that He may make known to us the mystery of His Will according to His good pleasure. And this His good pleasure He purposed in Him, to be dispensed in the fullness of the times: to reestablish all things in Christ, both those in the heavens and those on the earth. In Him, I say, in whom we also have been called by a special choice, having been predestined in the purpose of Him who works all things according to the counsel of His Will, to contribute to the praise to His glory, we who before hoped in Christ. And in Him you too, when you had heard the word of truth, the good news of your salvation, and believed in it, were sealed with the Holy Spirit of the promise, who is the pledge of our inheritance, for a redemption of possession, for the praise of His glory. – Thanks be to God.

If we knew how to say Father to the One who loves us as His true children, how joyful and strong we would be, even in the midst of trial! In order to accept from God everything that happens to us –and nothing happens without His command or permission– in order to obediently follow the arduous ways by which He draws us to Himself, in order to submit ourselves as little children, in silence and love to His providential designs whose scope often exceeds our own conceptions, we need to know and believe that He is our Father. This Father loves us and wants only our good, even if we do not understand Him. We are not asked to understand, but to believe and relate to Him blindly, holding His hand. As long as we always hold on to this Father’s Hand, everything will go well, everything will end beautifully: we will reach the top of the mountain of love and we will arrive at eternal bliss! Isn’t this our dearest ambition?

Sequéntia sáncti Evangélii secúndum Lúcam. (Luke 10, 21-24)
In that very hour He rejoiced in the Holy Spirit and said, “I praise Thee, Father, Lord of heaven and earth, that Thou didst hide these things from the wise and prudent, and didst reveal them to little ones. Yes, Father, for such was Thy good pleasure. All things have been delivered to Me by My Father; and no one knows who the Son is except the Father, and who the Father is except the Son, and him to whom the Son chooses to reveal Him.” And turning to His disciples He said, “Blessed are the eyes that see what you see! For I say to you, many prophets and kings have desired to see what you see, and they have not seen it; and to hear what you hear, and they have not heard it.” – Praise be to Thee, O Christ!

Back to the main page of the liturgy.
Let's Pray!
Educational activities our soul.