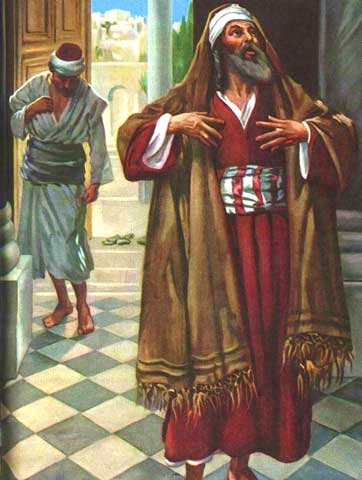 10th Sunday after Pentecost – The Pharisee and the Publican

The humble and suppliant confidence which the Church reposes in the help given her by her Jesus will ever preserve her from those terrible humiliations wherewith were punished the persecuting jealousy and pride of the Synagogue. She exhorts her children to imitate her when they are in trouble; like her, they must let their prayers and supplications be ever sounding in God’s ear.

Introit. When I cried out, the Lord heard my complaint against them that were coming against me; and he that was before all ages, and abides for ever, humbled them: cast your care on the Lord, and He will feed you. Psalm. Hear, O God, my prayer, and despise not my petition: look down upon me, and hear me.

Collect. O God, who chiefly manifestest Your omnipotence by pardoning and having mercy: increase Your mercy upon us; that, hastening to the things You have promised, You may make us partakers of heavenly goods. Through Christ Our Lod…

Lesson of the Epistle of St. Paul, the Apostle, to the Corinthians, 1 Chapter XII.

Gradual. Guard me, O Lord, as the apple of Your eye: and protect me under the shadow of Your wings. Let my cause be tried in Your presence: let Your eyes see justice done. Alleluia, alleluia. A hymn is due to You, O God, in Sion: and in Jerusalem shall a vow be paid unto You. Alleluia.

Sequel of the holy Gospel according to Luke, Chapter XVIII.

At that time: Jesus spoke this parable to some who trusted in themselves as just, and despised others. Two men went up into the temple to pray : the one a pharisee, and the other a publican. The pharisee standing, prayed thus with himself: O God, I give Thee thanks that I am not as the rest of men, extortioners, unjust, adulterers, as also is this publican. I fast twice in the week: I give tithes of all that I possess. And the publican standing afar off would not so much as lift up his eyes towards heaven: but struck his breast, saying: O God, be merciful to me a sinner. I say to you, this man went down to his house justified rather than the other, because every one that exalts himself, shall be humbled; and he that humbles himself, shall be exalted.

Humility, which produces within us this salutary fear, is the virtue that makes man know his right place, with regard both to God and to his fellow men. It rests on the deep-rooted conviction, put into our hearts by grace, that God is everything, and that we, by nature, are nothingness, nay, less than nothingness, because we have degraded ourselves by sin. Reason is able, of herself alone, to convince anyone, who takes the trouble to reflect, of the nothingness of a creature; but such conviction, if it remain a mere theoretical conclusion, is not humility: it is a conviction which forces itself on the devil in hell, whose vexation at such a truth is the chief source of his rage. As faith, which reveals to us what God is in the supernatural order, does not come from mere reason, nor remain confined to the intellect alone, so neither does humility, which teaches us what we ourselves are: that it may be true, real virtue, it must derive its light from above, and, in the holy Spirit, must move our will also. At the same time that this holy Spirit fills our souls with the knowledge of their littleness and misery, He also sweetly leads them to the acceptance and love of this truth, which reason, if left entirely to herself, would be tempted to look on as a disagreeable thought.

In heaven the humility of the saints is far greater than it was while they were here on earth, because they now see the realities, which then they could only faintly take in. Their happiness, yonder above, is to be gazing on and adoring that altitude of God, of which they will never have an adequate knowledge, and the more they look up at that infinite perfection, the deeper do they plunge into their own original nothingness. Let us get these great truths well into us, and we shall have no difficulty in understanding how it was that the greatest saints were the humblest creatures here below, and how the same beautiful fact is still one great charm of heaven. It must be so, for the light of the elect is in proportion to their glory. What, then, must all this exquisite truth be, when we apply it to the great Mother of God? The nearest to the throne of Her divine Son, She is precisely what She was at Nazareth; that is, She is the humblest of all creatures, because She is the most enlightened of all, and therefore understands, better than even the Seraphim and Cherubim, the greatness of God and the nothingness of creatures.