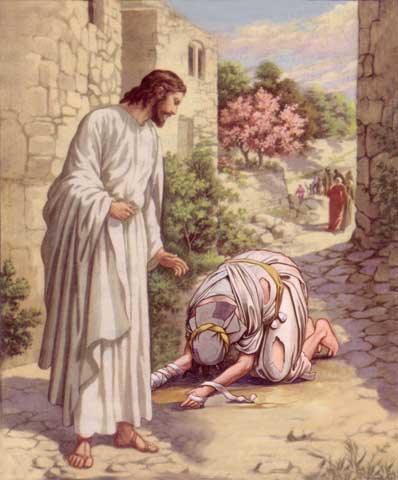 Have regard to Thy covenant, O Lord, and abandon not the souls of Thy poor to the end. Arise, O Lord, and judge Thine own cause; and forget not the cries of them that seek Thee.

Psalm. Why, O God, hast Thou cast us off, unto the end? why is Thy wrath kindled against the sheep of Thy pasture?

O almighty and eternal God, grant unto us an increase of faith, hope, and charity: and, that we may deserve what Thou promisest, make us to love what Thou commandest.

Lesson of the Epistle of St. Paul the Apostle to the Galatians, Chapter III.

Brethren: To Abraham were the promises made and to his seed. He said not, and to his seeds as of many: but as of one, and to your seed which is Christ. Now this I say, that the testament which was confirmed by God, the law which was made after four hundred and thirty years, does not cancel, or make the promise of no effect. For if the inheritance be of the law, it is no more of promise. But God gave it to Abraham by promise. Why then was the law? It was set because of transgressions, until the seed should come, to whom He made the promise, being ordained by angels in the hand of a mediator. Now a mediator is not of one: but God is one. Was the law then against the promises of God? God forbid! For if there had been a law given which could give life, verily justice should have been

by the law. But the Scripture hath concluded all under sin, that the promise by the faith of Jesus Christ might be given to them that believe.

“Look up to heaven, and number the stars, if you can! So shall your seed be!ˮ Abraham was almost a hundred years old, and Sara’s barrenness deprived him of all natural hope of posterity, when these words were spoken to him by God. Abraham, nevertheless, believed God, says the Scripture, and it was reputed to him unto justice. And when, later on, that same faith would have led him to sacrifice, on the mount, that son of the promise, his one only hope, God renewed His promise, and added: “In your seed shall all the nations of the earth be blessed.ˮ

It is now that the promise is fulfilled; the event justifies Abraham’s faith. He believed against all hope, trusting to that God who quickens the dead, and calls those things that are not, as those that are; and, according to the expression of John the Baptist, from the very stones of the gentile world there rise up, in all places, children to Abraham.

His faith, firm and, at the same time, so simple, gave to God the glory which He looks for from His creatures. Man can add nothing to the divine perfections; but –agreeably to God’s own words– though he sees them not directly here below, he acknowledges those perfections by adoring and loving them; he makes his faith tell upon his whole life; and this use which he freely makes of his faculties –this voluntary devotedness of an intelligent being– magnifies God, by adding to His extrinsic glory.

Look down, O Lord, upon Thy covenant; and forget not for ever the souls of Thy poor.

Arise, O Lord, and judge Thine own cause: remember how Thy servants are upbraided. Alleluia, alleluia. Thou, O Lord, art our refuge, from generation to generation. Alleluia.

Sequel of the holy Gospel according to Luke, Chapter XVII.

At that time: As Jesus was going to Jerusalem, He passed through the midst of Samaria and Galilee. And as He entered into a certain town, there met Him ten men that were lepers, who stood afar off; and lifted up their voice, saying: Jesus, Master, have mercy on us. Whom when He saw, He said: Go, show yourselves to the priests. And it came to pass, that as they went they were made clean. And one of them, when he saw that he was made clean, went back, with a loud voice glorifying God. And he fell on his face, before His feet, giving thanks: and this was a Samaritan. And Jesus answering, said: Were not ten made clean, and where are the nine? There is no one found to return and give glory to God, but this stranger. And he said to him: Arise, go your way; for your faith has made you whole.

The Samaritan leper, cured of that hideous malady which is an apt figure of sin, in company with nine lepers of Jewish nationality, represents the despised race of Gentiles, who were at first admitted, by stealth, so to say, and by extraordinary privilege, into a share of the graces belonging

to the lost sheep of the house of Israel. The conduct of these ten men, on occasion of their miraculous cure, is in keeping with the attitude assumed by the two peoples they typify, regarding the salvation offered to the world by the Son of God. It is a fresh demonstration of what the apostle says: “All are not Israelites that are of Israel; neither are all they who are the seed of Abraham, children; but, says the Scripture, in Isaac shall your seed be calledˮ; that is to say, not they who are the children of the flesh are the children of God: but they that are the children of the promise are counted for the seed; they are born of the faith of Abraham, and are, in the eyes of the Lord, His true progeny.