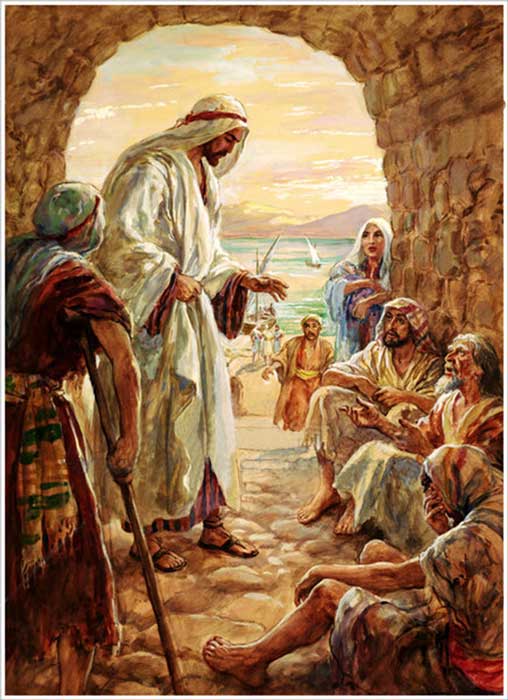 Give peace, O Lord, to those who patiently wait for Thee, that Thy prophets may be found faithful; hear the prayers of Thy servant, and of Thy people Israel. Psalm. I rejoiced at the things that were said unto me: we shall go into the house of the Lord. Glory be to the Father and to the Son and to the Holy Spirit…

The surest way to obtain grace is to be ever humbly acknowledging to our God our deep conviction that, of ourselves, we cannot please His divine Majesty.

May the influence of Thy mercy, O Lord, direct our hearts: for, without Thy help, we cannot please Thee. Through Christ Our Lord.

Lesson of the Epistle of St.Paul the Apostle to the Corinthians 1 Chapter I.

Brethren: I give thanks to my God always for you, for the grace of God, that is given you in Christ Jesus; that in all things you are made rich in Him, in all utterance, and in all knowledge, as the testimony of Christ was confirmed in you. So that nothing is wanting to you in any grace, waiting for the manifestation of our Lord Jesus Christ. Who also will confirm you unto the end without crime, in the day of the coming of our Lord Jesus Christ.

I rejoiced at the things that were said unto me: we shall go into the house of the Lord. Let peace be in thy strength, and abundance in thy towers. Alleluia, alleluia. The Gentiles shall fear Thy name, O Lord: and all the kings of the earth Thy glory. Alleluia.

Sequel of the holy Gospel according to Saint Matthew Chapter IX.

At that time: Jesus entering into a boat, passed over the water and came into His own city. And behold they brought to Him one sick of the palsy, lying on a bed. And Jesus seeing their faith, said to the man sick of the palsy: Be of good heart, son, your sins are forgiven you. And behold some of the scribes said within themselves: He blasphemes. And Jesus seeing their thoughts, said: Why do you think evil in your hearts? Whether is it easier to say: Your sins are forgiven you; or to say: Arise and walk? But that you may know that the Son of man has power on earth to forgive sins, (then said He to the man sick of the palsy,) Arise, take up your bed, and go into your house. And he arose and went into his house. And the multitude seeing it, feared and glorified God that gave such power to men.

The miracle of the cure of the paralytic, which gave an occasion to Jesus of declaring His power of forgiving sins inasmuch as He was Son of Man, has always been especially dear to the Church. Besides the narration she gives us of it from St. Matthew in today’s Gospel, she again, on the Ember Friday of Whitsuntide, relates it in the words of St. Luke. The Catacomb frescoes, which have been preserved to the present day, equally attest the predilection for this subject, wherewith she inspired the Christian artists of the first centuries. From the very beginning of Christianity, heretics had risen up denying that the Church had the power, which her divine Head gave her, of remitting sin. Such false teaching would irretrievably condemn to spiritual death an immense number of Christians, who, unhappily, had fallen after their Baptism, but who, according to Catholic dogma, might be restored to grace by the sacrament of Penance. With what energy, then, would our mother the Church defend the remedy which gives life to her children! She uttered her anathemas upon, and drove from her communion, those pharisees of the new law, who, like their Jewish predecessors, refused to acknowledge the infinite mercy and universality of the great mystery of the Redemption.

Like to her divine Master, who had worked under the eyes of the scribes, His contradictors, the Church, too, in proof of her consoling doctrine, had worked an undeniable and visible miracle in the presence of the false teachers; and yet she had failed to convince them of the reality of the miracle of sanctification and grace invisibly wrought by her words of remission and pardon. The outward cure of the paralytic was both the image and the proof of the cure of his soul, which previously had been in a state of moral paralysis; but he himself represented another sufferer, the human race, which for ages had been a victim to the palsy of sin. Our Lord had already left the earth, when the faith of the apostles achieved this, their first prodigy, of bringing to the Church the world grown old in its infirmity. Finding that the human race was docile to the teaching of the divine messengers, and was already an imitator of their faith, the Church spoke as a mother, and said: Be of good heart, son! your sins are forgiven you! At once, to the astonishment of the philosophers and sceptics, and to the confusion of hell, the world rose up from its long and deep humiliation; and, to prove how thoroughly his strength had been restored to him, he was seen carrying on his shoulders, by the labour of penance and the mastery over his passions, the bed of his old exhaustion and feebleness, on which pride, lust, and covetousness had so long held him. From that time forward, complying with the word of Jesus, which was also said to him by the Church, he has been going on towards his house, which is heaven, where eternal joy awaits him! And the angels, beholding such a spectacle of conversion and holiness, are in amazement, and sing glory to God, who gave such power to men.