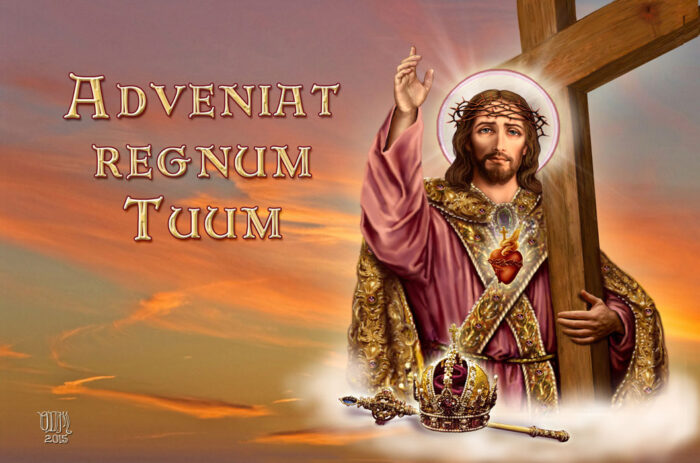 The Lord said: I think thoughts of peace, and not of affliction; you shall call upon Me, and I will hear you: and I will bring back your captive people from all places. Psalm. Thou, O Lord, hast blessed Thy land: Thou hast brought back the captive children of Jacob. Glory be to the Father, etc.

Stir up, we beseech Thee, O Lord, the wills of Thy faithful; that, becoming more zealous as to the fruit of the divine work, they may receive the greater remedies of Thy goodness. Through Christ Our Lord.

Lesson of the Epistle of St. Paul the Apostle to the Colossians. Chapter I.

Brethren: We cease not to pray for you, and to beg that you may be filled with the knowledge of God’s will, in all wisdom, and spiritual understanding: that you may walk worthy of God, in all things pleasing: being fruitful in every good work, and increasing in the knowledge of God: strengthened with all might, according to the power of His glory, in all patience and long-suffering with joy. Giving thanks to God the Father, who has made us worthy to be partakers of the lot of the saints in light: who has delivered us from the power of darkness, and has translated us into the kingdom of the Son of His love, in whom we have redemption through His blood, the remission of sins.

Thou hast saved us, O Lord, from them that afflict us: and hast put them to shame that hate us. Psalm. In God shall we glory all the day long; and in Thy name we will give praise for ever. Alleluia, Alleluia. Out of the depths I have cried unto Thee, O Lord: Lord, hear my prayer. Alleluia.

Sequel of the holy Gospel according to Matthew, Chapter XXIV.

At that time: Jesus said to His disciples: When you shall see the abomination of desolation, which was spoken of by Daniel the prophet, standing in the holy place: he that reads, let him understand. Then they that are in Judea, let them flee to the mountains; and he that is on the house-top, let him not come down to take anything out of his house; and he that is in the field, let him not go back to take his coat. And woe to them that are with child, and that give suck in those days. But pray that your flight be not in the winter, or on the Sabbath. For there shall be then great tribulation, such as has not been from the beginning of the world until now, neither shall be. And unless those days had been shortened, no flesh should be saved: but for the sake of the elect, those days shall be shortened. Then if any man shall say to you: Lo! here is Christ, or there: do not believe him. For there shall arise false Christs, and false prophets, and shall show great signs and wonders, insomuch as to deceive, if possible, even the elect. Behold I have told it to you, beforehand; if therefore they shall say to you: Behold He is in the desert, go ye not out: Behold He is in the closets, believe it not. For as lightning comes out of the east, and appeares even into the west; so shall also the coming of the Son of Man be. Wheresoever the body shall be there shall the eagles also be gathered together. And immediately after the tribulation of those days, the sun shall be darkened, and the moon shall not give her light, and the stars shall fall from heaven, and the powers of heaven shall be moved: and there shall appear the sign of the Son of Man in heaven: and then shall all tribes of the earth mourn: and they shall see the Son of Man coming in the clouds of heaven with much power and majesty. And He shall send His angels with a trumpet, and a great voice: and they shall gather together His elect from the four winds, from the farthest parts of the heavens to the utmost bounds of them. And from the fig-tree learn a parable: when the branch thereof is now tender and the leaves come forth, you know that summer is nigh. So you also, when you shall see all these things, know ye that it is nigh even at the doors. Amen, I say to you, that this generation shall not pass, till all these things be done. Heaven and earth shall pass, but My words shall not pass.

O Jesus! who then art to come to deliver Thy Church, and avenge that God who has so long borne every sort of insult from His creature man, that day of Thy coming will indeed be terrible to the sinner! He will then understand how the Lord has made all things for Himself – all, even the ungodly, who, on the evil day, are to show forth the divine justice. The whole world, fighting on His side against the wicked, shall then at last be avenged for that slavery of sin which had been forced upon it. Vainly will the wicked cry out to the rocks to fall upon them, and hide them from the face of Him that will then be seated on His throne; the abyss will refuse to engulf them; in obedience to Him who holds the keys of death and of hell, it will give forth, to a man, its wretched victims, and set them at the foot of the dread tribunal. O Jesus, how magnificent will Thy power then appear! The heavenly hosts will also be standing around Thee, forming Thy brilliant court, and assembling Thy elect from the four quarters of the earth.

What will be the joy of that true day of the Lord! What joy for them that have, by faith, lived in Christ, and loved Him without seeing Him! Identifying themselves with Thee, O Jesus, notwithstanding the weakness of the flesh, they have continued here below Thy life of suffering and humiliation. What a triumph when, delivered for ever from sin, and vested in their immortal bodies, they shall be borne aloft before Thy face, that they may for ever be with Thee!

But their chiefest joy on that great day will be to assist at the glorification of their most dear Lord, by the manifestation of the power which was given to Him over all flesh. Then, O Emmanuel! crushing the heads of kings, and making Thine enemies Thy footstool, Thou wilt be shown as the one Ruler of all nations. Then will heaven, and earth, and hell bow their knee before that Son of Man, who heretofore appeared on earth as a slave, and was judged, and condemned, and put to death between two thieves. Then, dear Jesus, Thou wilt judge the unjust judges, to whom, even in the midst of all the humiliations they put on Thee, Thou didst foretell this Thy coming on the clouds of heaven. And when, after the irrevocable sentence has been passed, the wicked shall go to everlasting torments, and the just to life eternal, Thy apostle tells us that, having conquered Thine enemies and been proclaimed undisputed King, Thou wilt consign to Thy eternal Father this Thy kingdom won over death; it will be the perfect homage of Thee, the Head, and of all Thy faithful members. God will thus be all in all. It will be the perfect accomplishment of that sublime prayer Thou taughtest mankind to make, which they daily offer up to the Father who is in heaven, saying to Him: Hallowed be Thy name! Thy kingdom come! Thy will be done on earth, as it is in heaven! O blissfully peaceful day, when blasphemy is to cease, and when this poor earth of ours, cleansed by fire from the filth of sin, shall be turned into a new paradise! Where, then, is the Christian, who would not thrill with emotion at the thought of that last of all the days of time, which is to usher in beautiful eternity? Who would not despise the agonies of his own last hour, when he reflects that those sufferings have really only one meaning in them, that the Son of Man, as the Gospel words it, is nigh even at the very doors!

O sweet Jesus, detach us every year more and more from this world, whose fashion passes away, with its vain toils, its false glories, and its lying pleasures.

Back to the main page of the liturgy.
Let's Pray!
Educational activities our soul.