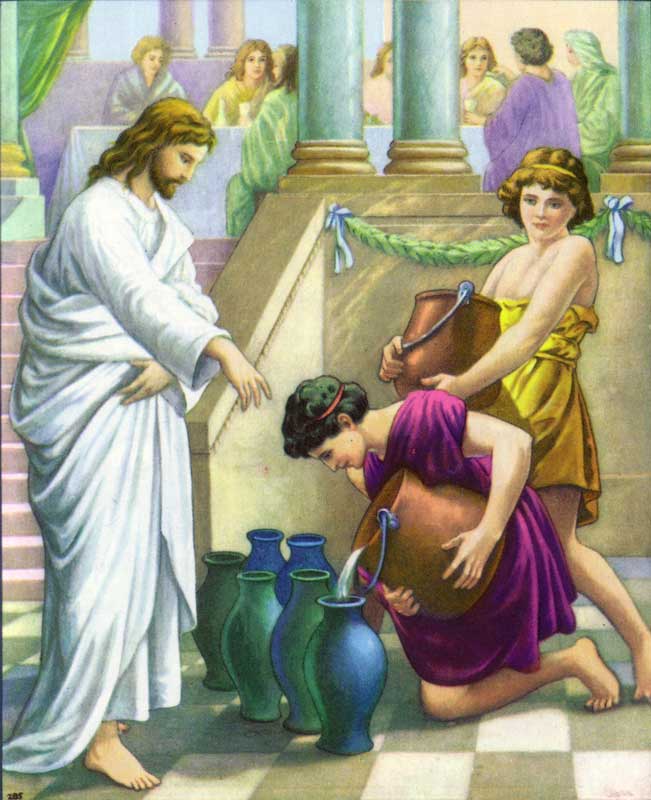 2nd Sunday after Epiphany – The wedding in Cana

Let us pray – Almighty and eternal God, You govern all things in heaven and on earth; in Your mercy hear the supplication of Your people, and grant Your peace in our times.

Reading from the Epistle of Saint Paul to the Romans

Brethren: We have gifts differing according to the grace that has been given us, such as prophecy to be used according to the proportion of faith; or ministry, in ministering; or he who teaches, in teaching; he who exhorts, in exhorting; he who gives, in simplicity; he who presides, with carefulness; he who shows mercy, with cheerfulness. Let love be without pretense. Hate what is evil, hold to what is good. Love one another with fraternal charity, anticipating one another with honor. Be not slothful in zeal; be fervent in spirit, serving the Lord, rejoicing in hope. Be patient in tribulation, persevering in prayer. Share the needs of the saints, practicing hospitality. Bless those who persecute you; bless and do not curse. Rejoice with those who rejoice; weep with those who weep. Be of one mind toward one another. Do not set your mind on high things but condescend to the lowly.

The Apostle Saint Paul, after having taught the faithful that they were all one body composed of several members, makes them understand that the difference of these members must not harm their mutual union; that all do not have the same function; that each member must do exactly his own, without undertaking on another’s; that God having endowed us all with different gifts, our duty is to make good use of them, and to make them contribute to the happiness of all. Let him, therefore, who has the gift of teaching, instruct others; let him, therefore, who has the gift of exhorting and preaching, exhort and preach with zeal, with unction, and in a way that is useful to those to whom he speaks; let him who gives alms, do so with a straight and simple spirit, that is, without seeking glory from it, and without too much fear of being deceived by the one to whom he gives: The feigned and simulated poverty that takes away alms cannot take away the merit of it; let the magistrate render justice with impartiality; let the soldier defend the State with courage and fearlessness; let fathers and mothers take care that their children are brought up in religion, in fear and love of the Lord; that children be docile, subject to their parents and to those whom their parents have made custodians of their authority; that they be warned of each other by expressions of affection and interest, and that they never forget that to serve one’s neighbor is to serve God.

Another recommendation of the Apostle is “not to exalt ourselves above others”. Nothing is more important for our happiness, even in this life. Indeed, almost all the sorrows we find in the world, or make others feel, come from having too high a feeling of self. From there come these considerations which one demands, this sensitivity to the slightest inattention, these complaints about injustice which men make on merit, this contempt which one cannot help but make others feel, and of which they know how to take revenge by reciprocal complaints and contempt. In order to be happier, one should almost always consider oneself less. In order to stifle any sense of pride or envy within us, let us remember that we are members of the same body, obliged to work for each other. When we look with the eyes of faith at the highest and lowest states, we see little difference. The dangers of dazzling jobs are the counterbalance of the honors attached to them; and tranquility, security for salvation, compensate for the darkness and the work of inferior conditions. Besides, what humiliations do we not expose ourselves to by allowing ourselves to be dominated by pride and ambition? You aspire to a high position: your faults, your mediocrity, your nullity perhaps, will be better seen, and you will be less inclined to be indulgent towards you. High places, eminent jobs are more often used to make known the merit and talents one should have, than those one has in reality. Let us not, therefore, aspire to the great, but let us be content with the lowest and most humble, and let us not raise ourselves above our brothers.

The Lord sent forth His word to heal them and to snatch them from destruction. Let them give thanks to the Lord for His kindness and His wondrous deeds to the children of men. Alleluia, alleluia. Praise the Lord, all you His angels, praise Him, all you His hosts. Alleluia.

Reading of the Gospel according to Saint John

At that time, a marriage took place at Cana of Galilee, and the Mother of Jesus was there. Now Jesus too was invited to the marriage, and also His disciples. And the wine having run short, the Mother of Jesus said to Him, “They have no wine.” And Jesus said to Her, “What would You have Me do, Woman? My hour has not yet come.” His mother said to the attendants, “Do whatever He tells you.” Now six stone water-jars were placed there, after the Jewish manner of purification, each holding two or three measures. Jesus said to them, “Fill the jars with water.” And they filled them to the brim. And Jesus said to them, “Draw out now, and take to the chief steward.” And they took it to him. Now when the chief steward had tasted the water after it had become wine, not knowing whence it was (though the attendants who had drawn the water knew), the chief steward called the bridegroom, and said to him, “Every man at first sets forth the good wine, and when they have drunk freely, then that which is poorer. But you have kept the good wine until now.” This first of His signs Jesus worked at Cana of Galilee; and He manifested His glory, and His disciples believed in Him.

A Feast is prepared; it is a Marriage-Feast; and the Mother of Jesus is present at it, for it is just, that, having co-operated in the mystery of the lncarnation of the Word, She should take part in all that Her Son does, and in all the favours He bestows on the elect. But, in the midst of the Feast, the wine fails. Wine is the symbol of Charity or Love, and Charity had failed on the earth; for the Gentiles had never tasted its sweetness; and as to the Synagogue, what had it produced but wild grape.

Mary said to Jesus: They have no wine. It is the office of the Mother of God to tell Him of the wants of men, for She is also their Mother. She is now ever saying to Her children: Do whatever He shall say to!

When the Emmanuel came, He had but to say, Now draw out, and the waterpots were seen to be filled with the wine of the New Covenant, the Wine which had been kept to the end. When He assumed our human nature; nature weak and unstable as Water He effected a change in it; He raised it up even to Himself, by making us partakers of His divine nature; He gave us the power to love Him, to be united to Him, to form that one Body, of which He is the Head, that Church of which He is the Spouse, and which He loved from all eternity, and with such tender love, that He came down from heaven to celebrate His nuptials with her.

O the wonderful dignity of man! The divine Charity, which dwells in the Sacrament of Love, is communicated to us; and, that we might not be unworthy of the espousals with Himself, to which He called us, He raises us up even to Himself. Let us, therefore, prepare our souls for this wonderful union, and, according to the advice of the Apostle, let us labour to present them to our Jesus with such purity as to resemble that chaste Virgin, who was presented to the spotless Lamb.

May the working of Your power, we beg of You, O lord, be increased in us, that being nourished by divine sacraments, we may by Your grace be prepared to obtain that which they promise.