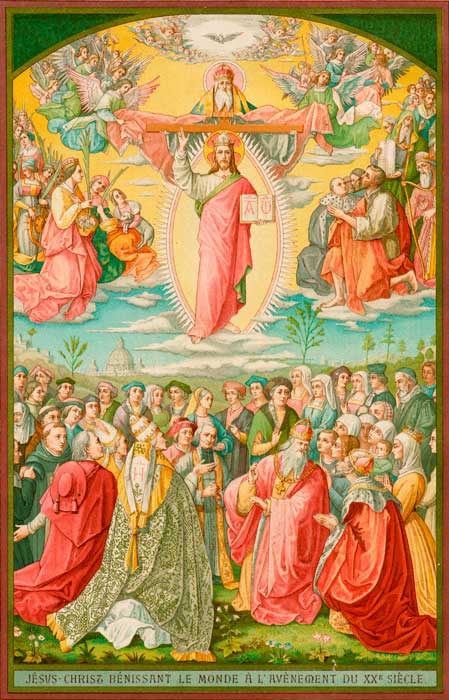 The Church, which never ceases to celebrate the feasts of its Saints one by one throughout the year, brings them all together today in a common feast. Beyond those she can name, it is the countless multitude of all the others she evokes in a grandiose vision: “of all nations, tribes, peoples and tongues, standing before the throne and before the Lamb, clothed in white robes and with palms in their hands,” they acclaim Him who redeemed them by His blood.

The feast of All Saints’ Day should raise us up with immense hope. Among the Saints in heaven, we have known some. All of them have lived on earth a life similar to ours. Baptized, marked with the sign of faith, faithful to the teachings of Christ, they have preceded us into the heavenly homeland and invite us to join them. The Gospel of the Beatitudes, while proclaiming their happiness, indicates the road they have taken; there is no other way to lead us to where they are.

I saw a great multitude, which no one could count, from every nation, from every tribe, from every language; and they stood before the throne, clothed in white robes with palms in their hands; and from their ranks there came a mighty cheer: Glory to our God! (Rev. VII, 9-10)

Time is no more; it is the saved humanity that is discovered before the eyes of the prophet of Pathmos. Militant and miserable life of this earth (Job. VII, 1), one day therefore your anguish will have its end. Our long-lost race will strengthen the choirs of pure spirits that Satan’s revolt once weakened; uniting themselves with the recognition of the redeemed of the Lamb, the faithful Angels will cry out with us: Praise, honor, power to our God for ever! (Rev. VII, 11-14)

The end of History

And this will be the end, as the Apostle says (I Cor. XV, 24): the end of death and suffering; the end of history and its revolutions now explained. The old enemy, cast into the abyss with his followers, will remain only to attest his eternal defeat. The Son of Man, liberator of the world, will have handed over the empire to God His Father. The supreme term of all creation, as of all redemption, God will be all in all (I. Cor. XV, 24-28).

Long before the seer of the Apocalypse, Isaiah was already singing:

I saw the Lord sitting on a high and sublime throne; and the bangs of His garment filled the temple beneath Him, and the Seraphim cried out one to another: Holy, Holy, Holy, the Lord of hosts; all the earth is full of His glory (Isaiah VI, 1-3).

Fear the Lord, you His Saints, for to whom He fears nothing will be lacking. – To those who seek the Lord, no good shall be lacking. Alleluia, Alleluia. – Come to Me, all you who are weary and overburdened, and I will give you relief. Alleluia.

Blessed are the guests at the wedding of the Lamb! (Ibid.) Blessed are we all, to whom the bridal robe of holy charity was given at baptism as a title at the banquet of heaven. Let us prepare ourselves, like Mother Church, for the ineffable destiny that love has in store for us. This is the purpose of the labors of this world: labors, struggles, sufferings for God, the garment of grace that makes the chosen ones, are priceless jewels. Blessed are those who weep! (Matth. 5:5)

They wept, those whom the Psalmist shows us digging before us the furrow of their mortal career (Psalm 125), and whose triumphant joy overflows over us, projecting at this hour like a ray of anticipated glory on the valley of tears. Without waiting for the day after life, the solemnity that has begun gives us entry with blessed hope to the abode of light where our fathers followed Jesus, the divine forerunner (Heb. VI, 19-20). What trials would not appear light, at the sight of the eternal bliss in which the thorns of one day blossom! Tears shed on the tombs that open at every step of this bitter land, how could the happiness of the dearly departed not mingle with your regrets the sweetness of heaven? Let us lend our ears to the songs of deliverance of those whose momentary separation thus attracts our tears; small or great (Rev. XIX, 5), this feast is theirs, as it will soon be ours. In this season when frost and night prevail, nature, forsaking its last jewels, seems to be preparing the world for its endless exodus to its homeland.

So let us too, then, sing along with the Psalmist:

I rejoiced at what was said to me: We will go into the house of the Lord. Our feet are still only in your courts, but we see your never-ending growth, Jerusalem, city of peace, which is being built in harmony and love. The ascent of the holy tribes to you continues in praise; your thrones still unoccupied are filled. May all good be for those who love you, O Jerusalem; may power and abundance reign in your fortunate precincts. For the sake of my friends and brethren who already dwell in you, I have set my pleasure in you; for the sake of the Lord our God, whose dwelling place you are, I have set all my desire in you. (Psalm 121)

“Praise Me as I am the crown of all the saints,” says God. (Liber specialis gratiae, P.a., c. XXXI)

And the Immaculate Virgin sees all the beauty of the chosen ones and their glory nourished by the blood of Christ, shining with the virtues practiced by Him; and responding to the divine call, She praises as best She can the most blessed, the always adorable Trinity, for being the crown of the Saints and their admirable dignity. Glory be to the Father, the Son, the Holy Spirit! with one voice, sings Paradise.

Grant forever, Lord, to the peoples who believe in Thee, the joy of honoring all the Saints and the protection of their constant prayer. Through our Lord Jesus Christ, Thy Son.

Back to the main page of the liturgy.
Let's Pray!