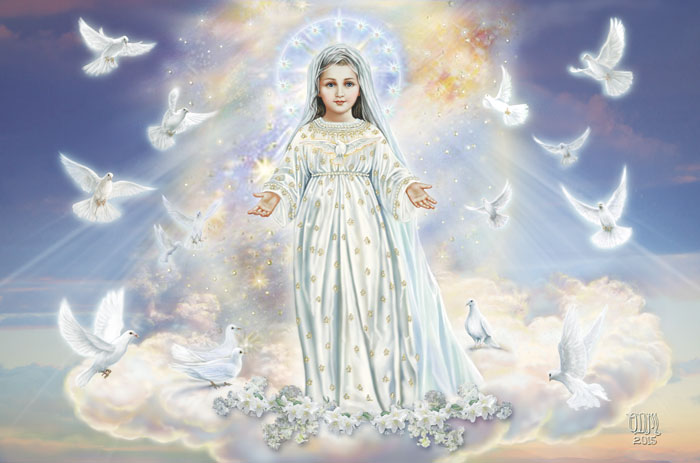 Feast of the Immaculate Conception of Mary

I will rejoice with exceeding joy in the Lord, and My soul shall exult in My God: for He hath clothed Me with the garments of salvation; and with the robe of justice He hath covered Me, as a bride adorned with her jewels. Psalm. I will extol Thee, O Lord, for Thou hast upheld Me: and hast not made My enemies to rejoice over Me. Glory be to the Father.

O God, who by the Immaculate Conception of the Virgin didst prepare a worthy dwelling-place for Thy divine Son; grant, we beseech Thee, that, as by the foreseen merits of the death of this Thy Son, Thou didst preserve Her from every stain of sin, we also may, through Her intercession, be cleansed from our sins and united with Thee.

Lesson from the Book of Wisdom, Prov. CLVIII.

The Lord possessed Me in the beginning of His ways, before He made anything from the beginning. I was set up from eternity, and of old before the earth was made. The depths were not as yet, and I was already conceived: neither had the fountains of waters as yet sprung out; the mountains with their huge bulk had not as yet been established: before the hills I was brought forth; He had not yet made the earth, nor the rivers, nor the poles of the world. When He prepared the heavens, I was present: when with a certain law and compass He enclosed the depths: when He established the sky above, and poised the fountains of waters: when He compassed the sea with its bounds and set a law to the waters, that they should not pass their limits: when He balanced the foundations of the earth: I was with Him forming all things: and was delighted every day, playing before Him at all times, playing in the world: and My delights were to be with the children of men. Now, therefore, ye children, hear Me. Blessed are they that keep My ways. Hear instruction and be wise, and refuse it not. Blessed is the man that hears Me, and that watches daily at My gates, and waits at the posts of My doors. He that shall find Me, shall find life, and shall have salvation from the Lord.

The Eternal Father would not do less for the Second Eve than He had done for the First; yet she was created, as was also the first Adam, in the state of original justice, which she afterwards forfeited by sin. The Son of God would not permit that the Woman, from whom He was to take the nature of Man, should be deprived of that gift which He had given even to her who was the mother of sin. The Holy Ghost, who was to overshadow Mary and produce Jesus within Her by His divine operation, would not permit that foul stain, in which we are all conceived, to rest, even for an instant, on this His Spouse. All men were to contract the sin of Adam; the sentence was universal; but God’s own Mother is not included. God, who is the author of that law; God, who was free to make it as He willed; had power to exclude from it Her whom He had predestined to be His Own in so many ways; He could exempt Her, and it was just that He should exempt Her; therefore, He did it.

Was it not this grand exemption which God Himself foretold, when the guilty pair, whose children we all are, appeared before Him in the garden of Eden? In the anathema which fell upon the serpent, there was included a promise of mercy to us. I will put enmities, said the Lord, between thee and the Woman, and thy seed and Her seed: She shall crush thy head. Thus was salvation promised the human race under the form of a victory over Satan; and this victory is to be gained by the Woman, and She will gain it for us also.

Raise up your heads, then, ye children of Adam, and shake off your chains! This day, the humiliation, which weighed you down, is annihilated. Behold! Mary, She who is of the same flesh and blood as yourselves, has seen the torrent of sin, which swept along all the generations of mankind, She has seen it flow back at Her presence and not touch Her; the infernal dragon has turned away his head, daring not to breathe his venom upon Her; the dignity of your origin is given to Her in all its primitive grandeur. This happy day, then, on which the original purity of your race is renewed, must be a Feast to you. The Second Eve is created, and from Her own blood, (which, with the exception of the element of sin, is the same as that which makes you to be the children of Adam,) She is shortly to give you the God-Man, who proceeds from Her according to the flesh, as He proceeds from the Father according to the eternal generation.

And how can we do less than admire and love the incomparable purity of Mary in Her Immaculate Conception, when we hear even that God, who thus prepared Her to become His Mother, saying to Her, in the divine Canticle, these words of complacent love: «Thou art all fair, O My Love! and there is not a spot in Thee!»

She is the future Mother of God, and She was ever holy, ever pure, ever Immaculate.

Blessed art Thou, O Virgin Mary, by the Lord the most high God, above all women upon the earth. Thou art the glory of Jerusalem, Thou art the joy of Israel, Thou art the honour of our people. Alleluia, alleluia. Thou art all fair, O Mary, and the stain original is not in Thee. Alleluia.

The following from the holy Gospel according to Saint Luke, chap. I.

At that time the Angel Gabriel was sent from God into a city of Galilee, called Nazareth, to a Virgin espoused to a man whose name was Joseph, of the house of David: and the Virgin’s name was Mary. And the Angel being come in, said unto Her: Hail, full of grace; the Lord is with Thee: blessed art Thou among women.

Oh! prepare our eyes that they may behold the divine Sun which will soon follow in Thy path, and give to the world His reign of light and day. Prepare our hearts, for it is to our hearts that this Jesus of Thine wishes to show Himself. To see Him, our hearts must be pure; purify them, thou O Immaculate Mother! The divine wisdom has willed that of the feasts which the Church dedicates to Thee, this of Thy Immaculate Conception should be celebrated during Advent; that thus the children of the Church, reflecting on the jealous care wherewith God preserved Thee from every stain of sin, because Thou wast to be the Mother of His divine Son, – might prepare to receive this same Jesus by the most perfect renouncing of every sin and every attachment to sin. This great change must be made; and Thy prayers, O Mary! will help us to make it. Pray, we ask it of Thee by the grace God gave Thee in Thy Immaculate Conception, that our covetousness may be destroyed, our concupiscence extinguished, and our pride turned into humility. Despise not our prayers, dear Mother of that Jesus who chose Thee for His dwelling-place, that He might afterwards find one in each of us.

O Mary! Ark of the Covenant, Ark of Salvation, the white Fleece filled with the dew of heaven… We delight in telling all Thy glorious titles, O Mary! for Thou art our Mother, and we love Thee, and the Mother’s glory is the glory of her children. Cease not to bless and protect all them that honour Thy immense privilege, O Thou that wast conceived on this day! May this feast fit us for that mystery, for which Thy Conception, Thy Birth, and Thy Annunciation, are all preparations, – the Birth of Thy Jesus in Bethlehem: yea, dear Mother, we desire Thy Jesus, – give Him to us and satisfy the longings of our love.