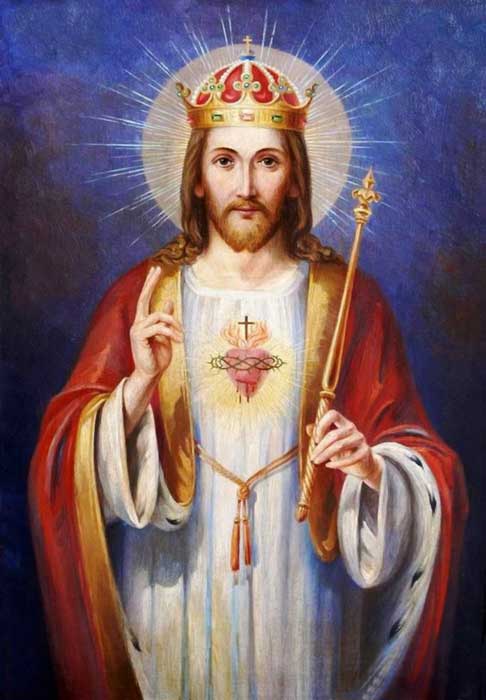 Worthy is the Lamb Who was slain to receive power, and divinity, and wisdom, and strength, and honor. To Him belong glory and dominion forever and ever. Alleluia, alleluia.Psalm 71. O God, with Your judgment endow the King, and with Your justice, the King’s son. Glory Be to the Father…

Almighty and everlasting God, You have willed to restore all things in Your beloved Son, the King of the whole creation; mercifully grant that all the families of nations that have been disunited by the wound of sin may become subject to His most sweet dominion.

Lesson of the Epistle of Saint Paul the Apostle to the Colossians 1, 12-20 Brethren: We give thanks to God the Father Who has made us worthy to share the lot of the Saints in light. He has rescued us from the power of darkness, and transferred us into the kingdom of His beloved Son, in Whom we have our redemption through His Blood, the remission of sins. He is the image of the invisible God, the firstborn of every creature. For in Him were created all things in the heavens and on the earth, things visible and things invisible, whether Thrones, or Dominations, or Principalities, or Powers. All things have been created through and unto Him, and He is before all creatures, and in Him all things hold together. Again, He is the head of the body, the Church; He, Who is the beginning, the firstborn from the dead, that in all things He may have the first place. For it has pleased [God the Father] that in Him all fullness should dwell, and that through Him He should reconcile to Himself all things, whether on the earth or in the heavens, making peace through the Blood of His Cross, in Christ Jesus our Lord. – Thanks be to God.

He shall rule from sea to sea, and from the River to the ends of the earth. All kings shall pay Him homage, all nations shall serve Him. Alleluia, alleluia. – Daniel 7, 14. His power shall be an everlasting power which shall not be taken away: and His kingdom shall not be destroyed. Alleluia.

At that time, Pilate said to Jesus, “Are You the King of the Jews?” Jesus answered, “Do you say this of yourself, or have others told you of Me?ˮ Pilate answered, “Am I a Jew? Your own people and the chief priests have delivered You to me. What have You done?” Jesus answered, “My kingdom is not of this world. If My kingdom were of this world, My followers would certainly have fought that I might not be delivered to the Jews, put, as it is, My kingdom is not from here.” Pilate therefore said to Him, “You are then a King?” Jesus answered, “You say it; I am a King. This is why I was born, and why I have come into the world, to bear witness to the truth. Everyone who is of the truth hears My voice.” 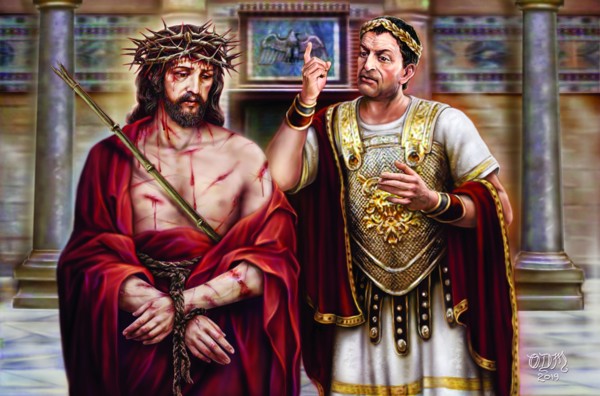 On the last Sunday of October, the Church celebrates the feast of Christ the King. Pope Pius XI instituted this solemnity as a formal affirmation of the social kingship of Our Lord Jesus Christ over the world. He is King not only of the soul and conscience, intelligence and will of men, but also King of families and cities, peoples and nations, King of the whole universe. In his Encyclical Letter Quas primas of December 11, 1925, Pius XI showed how sec­ularism, organizing society without any reference to God, leads to the apostasy of the masses and the ruin of society because it is a fundamental denial of this Kingship of Christ.

THE proclamation of the Kingship of Christ comes from the very mouth of Jesus, in the most solemn moment during the trial which preceded His Passion. Pilate explicitly questioned Him on the subject: Are You the King of the Jews? Jesus did not reply directly to this first question. Actually, He is not King of any one specific nation; His Kingdom has nothing in common with the kingdoms of earth. But to his second, more precise question, Are You a King? He replies unhesitatingly: You say it, I am King! Jesus proclaims His Kingship in the most formal manner before the highest civil authority in Palestine. He proclaims it, not in the midst of an enthusiastic crowd, nor in the triumph of His miracles, but bound with chains, before the one who is about to condemn Him to death, before a crowd thirsting for His Blood, a few moments before being dragged to Calvary, where, from the heights of the Cross, above His thorn-crowned Head, will appear for the first time the title of His royalty: “Jesus of Nazareth, King of the Jews.”

He had fled when the enthusiastic crowd wished to make Him their King; now He proclaims Himself King in the midst of the unspeakable humiliations of His Passion, thus affirming in the clearest manner that His Kingdom is not of this world, that His Kingdom is so sublime that no dishonor, no insults can eclipse it. But by this act, Jesus also tells us that He prefers to manifest His Kingship far more as a conquest acquired at the price of His Blood than as a title belonging to Him in virtue of His divine nature.

Let us go to meet this divine King with all the yearning of our soul. He presents Himself to us under an appearance that is so human, so loving, so welcoming; stretching out His arms on the Cross, this King invites all to come to Him, showing us the wound in His side as the symbol of His Love. Far from trying to avoid His domination, we beg for it, we request it, so that He may have the primacy in our mind and heart, and be the complete master of our will. We want to submit ourselves and all that belongs to us to “His most gentle rule.” (Collect of the Mass)

Hymn for the feast of Christ the King — Te sæculorum Principem

1. O Christ, we proclaim Thee the Prince of the ages, the King of the nations, the only Master of minds and hearts.

2. A criminal crowd cries out, “We do not want Christ to reign!” We acclaim Thee as the sovereign King of all men.

3. O Christ, the Prince of Peace, subject the rebellious hearts to Thyself, and by Thy Love gather into one fold those who have left the right path.

4. That is why Thou dost hang, with open arms, upon the bloody Cross, showing us Thy Heart pierced by the spear and burning with the fire of love.

5. That is why on the altars Thou dost hide Thyself beneath the species of wine and bread, making the salvation of the children of God spring forth from Thy pierced breast.

6. May the rulers of the nations honor Thee with public worship, may magistrates and judges venerate Thee, may laws and arts be the expression of Thy Kingship.

7. Let the standards of the kings who are subject to Thee shine forth in glory; let our nation and the homes of its citizens bow ­beneath the sweetness of Thy scepter.

8. Glory to Thee, O Jesus, who dominates and rules the princes of this world, and to the Father and the Holy Ghost, through the everlasting ages. Amen.

+ All power has been given to Me,

+ In Heaven and on earth.

Anthem. – He hath on His garment and on His thigh written: King of kings, and Lord of lords. To Him be glory and empire for ever and ever.

Collect. – Almighty and eternal God, who in Thy beloved Son, King of the whole world, hast willed to restore all things anew, grant in Thy mercy that all the families of nations, rent asunder by the wound of sin, may be subjected to His most gentle rule: Who liveth and reigneth with Thee, in the unity of the Holy Ghost, for ever and ever. Amen.

Back to the main page of the liturgy.
Let's Pray!