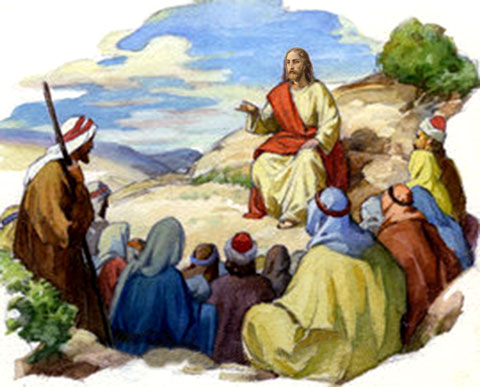 Introit. Clap your hands, all ye Gentiles! Shout unto God with the voice of joy. Psalm. For the Lord is most high: He is terrible: He is the great King over all the earth.

Collect. O God, whose providence is never deceived in what it appointed: we humbly beseech Thee to remove whatever may be hurtful, and to grant us all that will profit us.

Lesson of the Epistle of St. Paul the Apostle to the Romans, Chapter VI

Brethren: I speak a human thing, because of the infirmity of your flesh: for as you have yielded your members to serve uncleanness and iniquity unto iniquity; so now yield your members to serve justice, unto sanctification. For when you were the servants of sin, you were free from justice. What fruit therefore had you then in those things of which you are now ashamed? For the end of them is death. But now being made free from sin, and become servants to God, you have your fruit unto sanctification, and the end life everlasting. For the wages of sin is death; but the grace of God, life everlasting in Christ Jesus our Lord.

The Epistle of last Sunday aimed exclusively at putting it in language that could not be misunderstood; it showed us that it expresses what is meant by that Baptism which, when we are immersed in the water, unites us to Christ.

There, as in a sepulcher, the death of Jesus becomes ours, and delivers us from sin. Sold under sin by our first parents even before we had seen the day, and branded with its infamous stigma, our whole life belonged to the cruel tyrant. He is a master who is never satisfied with our service; he is a merciless exactor; there is scarce an hour that he does not make us feel his power over the members of our body; he does not allow us to forget that our body is his slave. But, if the life of a slave is under his master’s control, death comes at last and sets the soul free; and as to the body, the oppressor can claim nothing, once it is buried. Now, it was on the cross of the Man-God, who, as the apostle so strongly expresses it, was made sin because of our sins, that guilty human nature was considered by God’s merciful justice to have become what its divine and innocent Head was. The old man that was the issue of Adam the sinner has been crucified; he has died in Christ; the slave by birth, affranchised by this happy death, has had buried under the waters of Baptism the body of sin, which carried in its flesh the mark of its slavery.

The body of sin was indeed our flesh; not that innocent flesh which originally came all pure from its Creator’s hands, but the flesh which, generation after generation, was defiled by the transmission of a disgraceful inheritance. In Baptism, which the apostle calls the mysterious sepulcher, the sacred stream has not only washed away the defilement of this degraded body, but it has also set it free from those members of sin, which are the evil passions. These passions were powers of iniquity – that is, powers which deformed, and turned into uncleanness, those faculties and organs wherewith God had endowed us, that we might fulfill all justice, unto sanctification. At that moment of our Baptism the strong-armed tyrant forfeited his possession of us; that Baptism was a death which set his slave free. Sin being thus destroyed, the head of triple concupiscence has been severed, and the monster may writhe as he can; aided by grace, man thus liberated may always prevent, if he wishes, the coils of the serpent from again being joined with their head.

Gradual. Come, children, hearken unto me: I will teach you the fear of the Lord. Come ye unto Him, and be enlightened; and your faces shall not be confounded. Alleluia, alleluia. Clap your hands, all ye Gentiles! shout unto God with the voice of joy. Alleluia.

Sequel of the holy Gospel according to Saint Matthew, Chapter VII.

At that time: Jesus said to His disciples: Beware of false prophets, who come to you in the clothing of sheep, but inwardly they are ravening wolves. By their fruits you shall know them. Do men gather grapes of thorns, or figs of thistles? Even so every good tree brings forth good fruit, and the evil tree brings forth evil fruit. A good tree cannot bring forth evil fruit, neither can an evil tree bring forth good fruit. Every tree that brings not forth good fruit shall be cut down, and shall be cast into the fire. Wherefore by their fruits you shall know them. Not every one that says to Me, “Lord, Lord”, shall enter into the kingdom of heaven; but he that does the will of My Father who is in heaven, he shall enter into the kingdom of heaven.

Indeed, for each individual Christian, as for the Church at large, the security of the spiritual building depends primarily on the firmness of the foundation, which is faith. The Holy Ghost will not build on a foundation that is unsound or unsafe. When, especially, He is to lead a soul to the higher degrees of divine union, He exacts from her, as the first condition, that her faith, too, be above the average, – a faith, that is, with heroism enough to fight successfully those battles which brace the soul, and so render her worthy of light and love. In every stage of the Christian life, however, it is faith that provides love with its enduring and substantialnourishment; it is faith that gives to the virtues their supernatural motives, and makes them fit to form a worthy court for their queen, charity. A soul’s development never goes beyond the measure of her faith. The capaciousness of faith, and its ever-growing plenitude, and its certified conformity with truth, these are the guarantees of the progress which will be made by a just man; whereas all such holiness as affects to be guided by a faith which is cramped or false is holiness of a very dubious kind, and one that is exposed to most fearful illusions.

It was, therefore, a good and a wholesome thing that faith should be put to the test, for it grows brighter and stronger under trial. St. Paul, in his Epistle to the Hebrews, is enthusiastic in his praise of the triumphs won by the faith of our forefathers.Could there be denied to the new Covenant those glorious combats which constituted the eternal merit and honour of the Saints who lived in the period of expectation and figures? It is by their victorious faith in the word of the promise, that all those worthy ancestors of the Christian people merited to have God Himself as their praise-giver.For us, who joyously have possession of that Messias who to them was but the object of heroic hope, our trial cannot be like theirs – the trial of expectation. This is quite true; and yet, heresy, which is the offspring of man’s pride and hell’s malice – heresy and its manifold outcomings, which are ever producing the diminution of truth in this world – will give us occasions of merit even in our possession of what they beheld and saluted only afar off. Man is ever trying to intrude his foolish ideas into the truths of divine revelation; and, as to the prince of this world, he will do all in his power to encourage these audacious attempts at corrupting the purity of the word. But Wisdom, who is never overcome, will turn all these impious efforts into an occasion of glorious victories for her children. Here we have the reason why God permitted, from the very commencement of the Church’s existence, and still permits, that sects should be continually springing up. It is in the battlefield against error that the Church brings forth the armour of God, and shows herself all brilliant with that absolute truth which is the brightness of the Word, her Spouse; it is by his personal triumph over the spirit of lying, and by spontaneous adhesion to the teachings of Christ and His Church, that the Christian shows himself to be a true child of light, and becomes himself a light to the world.

The combat is not without its dangers for the Christian who would hold, in all its integrity, the faith of his mother the Church. The tricks of the enemy, his studied and obstinate hypocrisy, the crafty skill wherewith he tries to stir up in the soul, almost without her knowing it, a score of little weaknesses of hers which more or less favour error – all this frequently ends in injuring the light, not perhaps in extinguishing it altogether, but in robbing it of some of its brilliancy. And yet, they who live on the teachings given us in our today’s Gospel are sure to come off with the victory. Let us meditate upon them with gratitude and love; for it is by such teachings that eternal Wisdom grants us what we so ardently ask of Him, when in Advent we thus beseech Him: “Come and teach us the way of prudence!” Prudence, the friend of a wise man, guardian of his treasures, and his surest defence, has no greater peril from which to keep him than shipwreck concerning the faith; if faith be lost, all is lost. No price is too great to give for that prudence of the serpent which, in a disciple of Christ, goes so admirably with the simplicity of the dove. If we are happy enough to possess prudence, we shall readily distinguish between those false teachers whom we must shun and those we must hearken to – between the falsifiers of the word and its faithful interpreters.

By their fruits shall ye know them, says our Gospel, and history confirms the words of our Redeemer. Under the sheep’s clothing, which they wear that they may deceive simple souls, the apostles of falsehood ever betray their real nature. The artful language they use, and the flatteries they utter for gain’s sake, cannot hide the hollowness of their works. They separate themselves from the flock of Christ, and flee from the light; for, as the Apostle says: “All things that are reproved, or deserve to be so, are made manifest by the light; and as to the things that are done by them in secret, it is a shame even to speak of them. Therefore, be ye not partakers with them.”

The useless or rotten fruits of darkness, and the trees of autumn, twice dead which bear such fruitson their withered branches, both of them shall be cast into the fire. If you yourselves were heretofore darkness, now that you have become light in the Lord by Baptism, or by a sincere conversion, show yourselves to be so, and produce the fruits of light, in all goodness, and justice, and truth. On this condition alone can you hope to enter into the kingdom of heaven, and call yourselves disciples of that Wisdom of the Father, who, on this seventh Sunday, asks us to give Him our love.