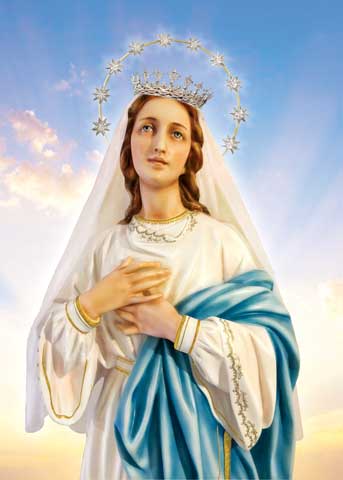 August 15 — Our Lady of Assumption

The glorious Assumption of Mary

Blessed among all women by reason of Her Divine Maternity, the Immaculate Virgin, who from the moment of Her conception had the privilege of being preserved from the stain of original sin, was also not to undergo the corruption of the tomb. On November 1, 1950, Pope Pius XII defined the dogma of the Assumption of the Blessed Virgin Mary, thus solemnly proclaiming that the belief that Mary, at the completion of Her earthly life, was lifted up body and soul into the glory of Heaven, is really part of the deposit of Faith received from the Apostles. Since the earliest centuries of the Church, the Assumption has always been celebrated on August 15. In 1944, Pius XII fixed the feast of the Immaculate Heart of Mary on August 22, the octave day of the Assumption.1

The last days of Mary’s life

Since the Ascension of Our Lord Jesus Christ, the life of the Blessed Virgin had been a long and unspeakable martyrdom of love.2 Leaning on the arm of Her adopted son or accompanied by the holy women, the Mother of God was often seen directing Her steps towards Calvary. She would stop at the places marked by some particular suffering of the adorable Victim, reliving in Her Heart each scene of the bloody drama. Thus, from one station to another, She reached the Holy Sepulcher, which She sprinkled with Her tears, and from which She would never have separated.

She lived in a small house next to the Cenacle, in the vicinity of a sanctuary where the beloved disciple offered the Holy Sacrifice. Each day Mary had the unspeakable joy of receiving Holy Communion. When John would present the Sacred Host, he would repeat the words that Jesus had spoken to Her as He hung upon the cross: Woman, behold Your Son! It was only fitting that Jesus should give back to Her as food the flesh He had received from Her; that He should ever dwell in the bosom that had given Him that sacred flesh and never forsake Her, who during thirty-three years had never forsaken Him.

Mary’s humble dwelling had become the most venerated pilgrimage site of the early Church. The Apostles loved Her as the holiest and most tender of mothers, and honored Her as the most venerated queen. From Her they learned to know the Saviour more perfectly in order to devote themselves with still greater generosity to His work. They brought their first disciples to Her feet to confirm them in faith and charity.

When Her earthly mission ended, Mary was informed by the Archangel Gabriel of Her approaching death. Meanwhile, moved by a heavenly inspiration, the Apostles set forth from the countries they were evangelizing to be present for the last moments of their beloved Queen. They all wept at the thought of losing such a Mother. Mary told them: “My children, do not weep because I am leaving you. Rejoice instead that I am going to My Son, and I am passing from sorrow to joy. In heaven I will continue to love you, watch over you, and show that I am your Mother.”

The day so earnestly awaited by Mary finally arrived. For one last time, She partook of the Eucharistic Bread and relished the charm of the intimate presence of Her Beloved. Soon the Apostles saw the Saviour, accompanied by His Angels, coming to receive the soul of His Divine Mother.

Nevertheless, the Apostle Thomas did not arrive until three days after this blessed death. Filled with regret that he had not been able to receive a final blessing from the august Mary, he implored them to open Her tomb so that he might contemplate Her one last time. His wish was willingly granted. But, O the wonder! the tomb was empty, and lilies, the symbol of purity and virginity, had grown in the place where that chaste body had been laid: that immaculate body, too holy to remain in the grave, which the Angels and the Archangels, the Seraphim and the Cherubim bore away upon their wings when the voice of God had awakened Her from Her short sleep.

The coronation of Mary

What pen could describe Mary’s triumphant entry into Heaven? If God had judged it fitting that the Ark of the Ancient Covenant should have been introduced with such pomp into the City of David, what pomp must have been displayed at His Mother’s entrance into the Divine City? It was not enough of a group of Angels to form Her escort, the King of Angels Himself wanted to accompany Her with the entire heavenly court. The Son of the Eternal, who is also the Son of Mary, came down from Heaven to meet His Mother and spoke these sweet words to Her: Arise, make haste, My love, My dove, My beautiful one, for winter is now past and its rigors are over and gone. Come from Lebanon, O My Mother, come and take the crown that is destined for You.3

Mary leaves the earth; however, remembering how many dangers and miseries She leaves Her children exposed to, She turns to them with a compassionate, loving gaze, to tell them that She will not forget them in the splendors of Her glory. Jesus reaches out His hand to Her and Mary, rising into the air, goes with Him through the clouds and the heavenly spheres, and arrives at the threshold of the blessed dwelling place. The eternal gates open up and the Virgin of Judah enters Heaven as its Queen.

The Saints and the heavenly Spirits had no sooner contemplated Her than, amazed by Her radiance and beauty, they cried out in one voice: “Who is She that rises from the desert, radiant with so many graces and virtues, and who advances leaning on Her beloved? Who is She that has the Lord Himself in Her cortege?” And unanimous acclamations replied, “This is the Mother of our King, this is our Queen, this is the Holy of Holies, the beloved One of God, the Immaculate Dove, the most beautiful of all creatures!” And all the hierarchies of Heaven, the Angels, Archangels, Virtues, Powers, Principalities, Dominions, Thrones, Cherubim and Seraphim, and all the orders of the Saints, the Patriarchs, Prophets, Martyrs and Virgins, proclaiming Her praises, laid their immortal crowns at Her feet.

But those who came to Her most eagerly were our first parents, Adam and Eve. “Beloved daughter,” they said to Her, “You have repaired the evil that our fault caused to the human race, You have won back for the world the grace it had lost, You have crushed the head of the serpent that had conquered us. It is by You that we have been saved. Blessed are You.” In what terms did Saint Anne and Saint Joachim, the authors of Her being, hail Her! And as for Joseph, Her spouse, what human tongue could tell the joy with which he beheld the glorious entry of his Spouse into Heaven!

Words cannot suffice to say with what love and graciousness the Holy Trinity welcomed Her: how the Father received Her as His beloved Daughter; the Son as His Mother; the Holy Spirit as His Bride. The Father called Her to share His power, the Son His wisdom, and the Holy Spirit His love. And the three Divine Persons crowned Her radiant brow with a diadem of twelve stars, brighter than rubies or diamonds, and, seating Her upon Her throne at the right hand of Jesus, proclaimed Her Queen of Heaven and Earth, and commanded the Angels and all other creatures to recognize Her as such, to serve and obey Her in everything.

And what does Mary do upon Her lofty throne? The Mediatrix of the human race with Her Son and after Her Son, She intercedes for us, She pleads our cause, She draws fully from the heavenly treasure and widely distributes pardons, blessings and graces. Mary is a Queen, but a Queen of clemency and mercy. Her goodness has no bounds, and Her power is equal to Her goodness. What does She ask to grant us Her protection? Hear one of Her greatest servants:

Saint John Berchmans (1599-1621), a Jesuit religious, who throughout his life was gratified with the most signal favors of this majestic Queen, was at the point of death. The community gathered around his bed, and the superior commanded him, in the name of obedience, to tell his brothers what he had done and what should be done to merit the astonishing graces with which Mary had favored him. To which the dying Saint replied, “What Mary asks is very little indeed: the slightest homage, provided it is constant.”

Need more be said to arouse in our hearts a filial trust in this good Mother? So let us turn to Her in all our needs of body and soul. Above all, let us pray to Her through the merits of Her blessed death, to obtain for us a good end. Let us show our joy at having in Heaven a Mother so powerful, so good and so easily moved.

To make our sentiments of devotion and our exercises of piety towards Mary really practical, let us ask ourselves seriously by what means She arrived at such a degree of honor and bliss. The dignity of the Mother of God was undoubtedly something great, yet this was not what God crowned in Mary. Her fidelity to grace was the measure of Her glory, and it will be the measure of ours. Children of Mary, let us imitate our Mother, and let us adopt this motto today: do the little things greatly.

O my God, who are all love! I thank You for having given me in Mary such a good and powerful Mother; give me the grace to be deserving of Her tenderness by a constant fidelity in imitating Her virtue, Her humility, Her purity and Her love for Her Divine Son. I take the resolution to love God above all things, and my neighbor as myself for the love of God; and as a testimony of this love, I will take the Blessed Virgin as my confidante.

2. This article is based on: Rev. Canon Weber, “The Last Days of Mary’s Life, Her blessed Death and Assumption,” in The Acts of the Apostles; and Msgr. Gaume, Catechism of Perseverance. Complete bibliography at the end of the article.

This beautiful day of the Assumption reminds us of Our Lady’s ascent to Heaven, the crowning of Her life as Mother of God, in fulfillment of God’s Will. The life of the Blessed Virgin was a perpetual, continuous fiat. She could say as Her divine Son, My food is to do the will of My Father who sent me(St. John 4:34), that is, the Will of God. This complete conformity of Mary to God’s Will is what made Her great. It is not only the fact of having been the Mother of God that made the Virgin Mary so great, it is Her obedience to God.

Let us ask for ourselves also that, following the example of our good Mother, we may fulfill all of God’s plans for us. May we pass on earth doing good, as She Herself did. Let us prove our devotion to Mary by imitating Her in everything.

Father John Gregory of the Trinity