Novena to Our Lady of Fatima 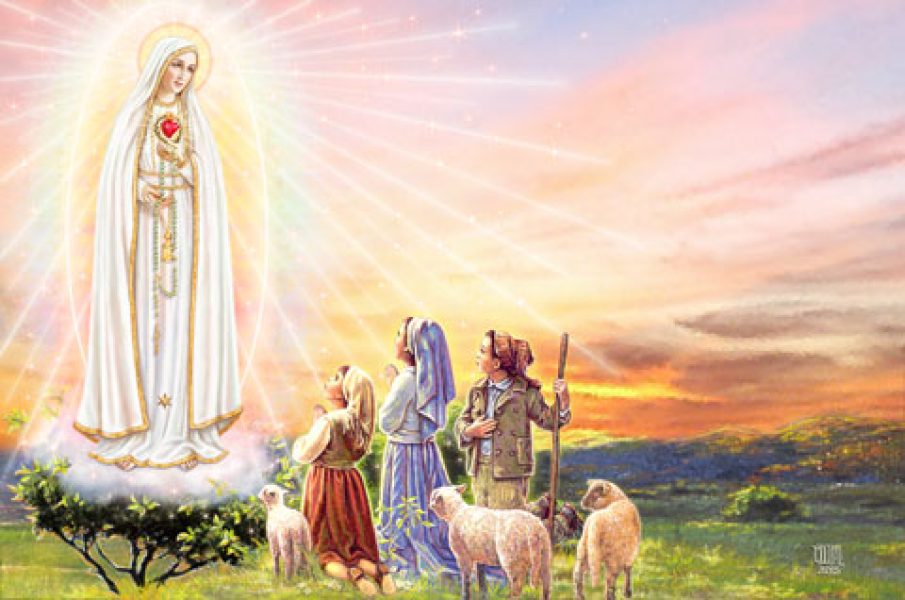 Lucia, Francisco and Jacinta were little shepherds whose lives passed quietly in the hamlet of Fatima in Portugal. They were 10, 9 and 7 years old. Every morning they left together to graze their sheep.

In 1917, during the First World War, the Blessed Virgin Mary appeared to them six times, from May 13 to October 13. As She had promised to perform a great miracle to prove that She was indeed the Mother of God, 70,000 people gathered at Fatima on October 13. It was raining heavily that day, and the crowd persevered in prayer and waiting despite the mud, rain and cold.

As soon as Our Lady arrived, Lucia asked everyone to close their umbrellas. The rain stopped immediately and all the spectators’ clothes were instantly dry and clean.

Then Lucia shouted, “Look at the sun!” It began to leap across the sky, constantly changing color and drawing gigantic circles. Witnesses compared these movements of the sun to those of a dance. For several minutes, which seemed endless because the people were so frightened, the sun rolled over itself as though it were descending on the crowd. Suddenly, the powerful star resumed its position in the sky. God wanted to show His power and that of His Mother: all the elements of nature are like a toy in Their hands. The miracle was so extraordinary that many unbelievers, who had come on purpose to mock the people, were immediately converted.

During each apparition, Our Lady asked the children for “Prayer and Penance”, assuring them that if the world converted and returned to God, war would cease and peace would return for the happiness of all peoples. She insisted on the daily recitation of the Rosary.

Today, Our Lady’s words are more relevant than ever. This novena is a way to respond to the requests of Our Lady of the Rosary of Fatima. During these nine days, let us add to the prescribed prayers, one or a few sacrifices that are particularly costly to us. Our Lady said to the children of Fatima:

“Sacrifice yourselves for sinners and say often, but especially when making some sacrifices:

O Jesus, it is for Your love, for the conversion of sinners and in reparation for the offenses committed against the Immaculate Heart of Mary.”

Daily prayers of the novena

Queen of the Rosary, sweet Virgin of Fatima, You deigned to appear in the land of Portugal, to reveal the treasures of graces hidden in the recitation of the Rosary. Put in our hearts a sincere and fervent love in practicing this devotion.

You have brought peace, both interior and exterior, to this country of Portugal, which was so troubled at the time, and we ask You to watch over our beloved country, which is afflicted by so many evils. Ask Jesus, Your Son, to resurrect souls to the life of grace. Beg Him to intervene at last for the salvation of our poor world, and to renew the face of the earth.

Bring peace to all the nations of the world, so that we, Your children, may live as brothers and true children of God.

We ask You during this novena for an increase of love for God, so that we may no longer offend Him and serve Him worthily. We ask You for the conversion of the sinners of the whole world and eternal salvation for all those who are going to die. Amen.

Prayers taught by the Angel of Fatima (to be recited often)

My God, I believe, I adore, I hope and I love You! I beg pardon for those who do not believe, do not adore, do not hope and do not love You. – Most Holy Trinity, Father, Son and Holy Ghost, I adore You profoundly. I offer You the most precious Body, Blood, Soul and Divinity of Jesus Christ, present in all the tabernacles of the world, in reparation for the outrages, sacrileges and indifferences by which He is offended. And through the infinite merits of His most Sacred Heart, and the Immaculate Heart of Mary, I beg of You the conversion of poor sinners. Amen.

Let us pray a rosary in honor of our Queen and Mother who asked us to do so in Fatima, in Lourdes, in Ile Bouchard, in Saint-Jovite, in Ormstown, in Garabandal, in Pointe-Noire and in so many other places.

Method to pray the Rosary